U.S. still in fiscal deadlock, but glimmers of hope emerge 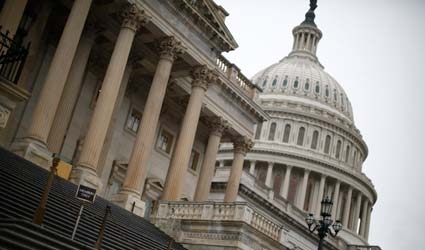 WASHINGTON (Reuters) – A few faint glimmers of hope surfaced on Monday in the U.S. fiscal standoff, both in Congress and at the White House, with President Barack Obama saying he would accept a short-term increase in the nation’s borrowing authority to avoid a default.

Separately, a Senate aide said Republican Senator Rob Portman, an Ohioan influential on budget issues, was floating a plan to cut federal spending and reform the U.S. tax code as part of a broader deal to reopen shuttered government agencies and raise the government’s debt ceiling.

While Portman’s initiative may or may not gain traction, most lawmakers believe that a budget deal like it will be necessary to end the stalemate.

Still, seven days into a government shutdown and only 10 days from a critical need to raise the nation’s debt limit, nothing amounting to a breakthrough was in sight.

Senate Democrats could introduce a bill to raise the debt limit this week, according to a Democratic aide. Considering the procedural roadblocks the measure could face, aides said they have to get the legislation rolling well before October 17, when Treasury Secretary Jack Lew has said the government will run out of borrowing authority.

It was uncertain whether Democrats can muster the 60 votes they would need to push a debt ceiling bill, with no strings attached, through the Senate. The measure would likely run into opposition from Senate Republicans such as Texas Senator Ted Cruz, who has been leading the drive to make delaying Obama’s healthcare law a condition for raising the debt ceiling.

Democrats, and Obama, stepped up their criticism of House of Representatives Speaker John Boehner for refusing to schedule a vote on a separate unencumbered measure to fund the government and end the shutdown. They believe it would pass with most Democrats in the House voting for it along with a handful of Republicans. Boehner said Sunday that it would fail.

“If Republicans and Speaker Boehner is saying there are not enough votes, then they should prove it,” said Obama.

Later on Monday, the House passed another of its targeted funding bills, this time to reopen the Food and Drug Administration, with 20 Democrats joining 215 Republicans. The Democratic-led Senate has rejected this approach, calling for re-opening the entire government.

Representative Lynn Westmoreland, a Georgia Republican, said the failure of the Senate to take up bills meant the government was likely to stay shut until a deal is crafted over the debt limit. “To me, we’re into the debt ceiling fight now,” he said.

Obama’s press secretary, Jay Carney, told reporters the president would be willing to accept a short-term debt ceiling increase in order to get past the potential crisis date of October 17 when the government hits the $16.7 trillion borrowing limit.

Carney said that while the White House would prefer raising the ceiling enough to last a year, “we have never stated and we’re not saying today that the debt ceiling ought to be or can be any particular length of time.”

A short-term increase would give Republicans and Democrats some breathing room, but by itself would not address the substantive issues preventing an agreement.

The last big confrontation over the debt ceiling, in August 2011, ended with an 11th-hour agreement under pressure from shaken markets and warnings of an economic catastrophe if there was a default.