No room for error as England seek World Cup spot 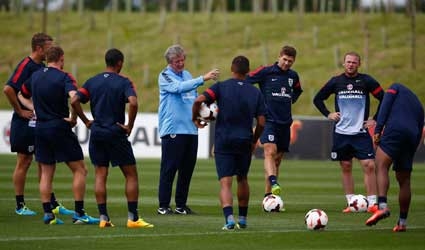 LONDON (Reuters) – England will qualify for the 2014 World Cup finals if they beat Montenegro and Poland in their final two Group H qualifiers and manager Roy Hodgson knows there is no room for error as they seek to secure their place in Brazil.

Both matches are at Wembley and England go into them topping the group by one point from Montenegro, who are Friday’s visitors, and Ukraine, and three clear of Poland, who provide next Tuesday’s opposition.

Hodgson, appointed just before last year’s European Championship, is confident England will complete the task and avoid the doomsday scenario of failing to reach the finals – something that last happened under Graham Taylor 20 years ago.

“My life at the moment is these two games,” Hodgson told reporters this week. “As for the doomsday scenarios put before me, I won’t have to confront them because I believe, and am confident, in that belief that the team will do it.

“Of course I am nervous, any coach worthy of the name is nervous when the whistle goes.

“But I believe we have the players to complete the task. I am certain as I can be that we will achieve our aim.”

England are the only unbeaten team in the group, and will look to preserve that record against Montenegro without left-back Ashley Cole, who will miss the match with a rib injury.

The 32-year-old, who has played 105 times for his country, is likely to be replaced by Everton’s Leighton Baines but has not yet been ruled out of Tuesday’s match against Poland.

Baines will win his 20th cap if, as expected, he lines up alongside Everton team mate Phil Jagielka with the back four completed by Chelsea’s Gary Cahill and Tottenham’s Kyle Walker.

Steven Gerrard, Frank Lampard and Jack Wilshere are expected to play in midfield with Liverpool’s free-scoring Daniel Sturridge and the Manchester United pair of Danny Welbeck and Wayne Rooney up front.

Rooney, Sturridge and Welbeck all missed the sterile 0-0 draw with Ukraine in Kiev a month ago.

Joe Hart will keep his place in goal despite a recent loss of form.

Wilshere is confident England will qualify and he is delighted to be in the mix after publicly expressing his regret after being photographed smoking a cigarette outside a nightclub last week.

“I know what I did was wrong, it was a mistake and I have learnt from it and I have apologised,” he told reporters on Tuesday.