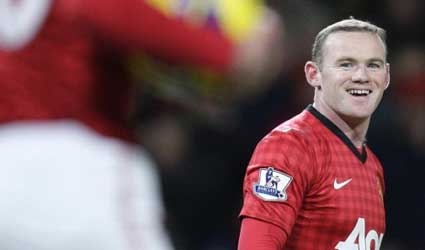 (Reuters) – Wayne Rooney’s unhappiness at Manchester United last season stemmed from being forced to play in midfield but he says he is now settled at the club under new manager David Moyes.

It had been widely reported that the 27-year-old was upset at life under former manager Alex Ferguson and that he wanted to quit the club he joined in 2004, with Premier League rivals Chelsea making three bids for the striker.

United refused to sell and Rooney has since started the season strongly, scoring three times in six league matches and netting a brace in his one Champions League appearance against Bayer Leverkusen.

“I didn’t feel I got a consistent run of games up front,” Rooney told reporters ahead of Friday’s crucial 2014 World Cup qualification match against Montenegro at Wembley.

“I actually felt when I played midfield I did OK, but I didn’t want to play there.

“I’ve no problem in the past playing out of position, but I felt I deserved the right to play in my position and that wasn’t happening. I think naturally I was a bit disappointed and maybe that affected some of the games I played. Maybe when I’m a bit older, losing my legs a bit, I can go back there.”

Rooney scored 12 league goals in United’s title winning campaign, but he took a back seat to Robin van Persie following his arrival from Arsenal, with the Dutchman the league’s top scorer with 26.

“Everyone at the club knew that’s where I wanted to play and I think that’s why I was disappointed because I got told to play in midfield. I didn’t want to, but I’d always go in and try to help the team. There had to come a point where for my own career I had to be a bit selfish really.”

Rooney, who burst onto the scene as a 16-year-old under Moyes at Everton, was also believed to have been upset at Ferguson publicly airing claims that he had submitted a transfer request.

He said that he was now happy at the club and content with life under Moyes, despite their shaky start to the season that sees United lying ninth after seven matches.

He would not reveal whether he was keen to extend his time at Old Trafford when his current deal expires however.

“David Moyes has come in, he’s playing me up front and I’m enjoying it. You can see I’m playing and I’m happy in my football.

“I’ll have more discussions with the club and we’ll see what happens from there. I’ve been settled all summer. I’ve spoke to the people who matter at the club and we’ve known ourselves what we’re doing. I’m sure the club has made that clear.”