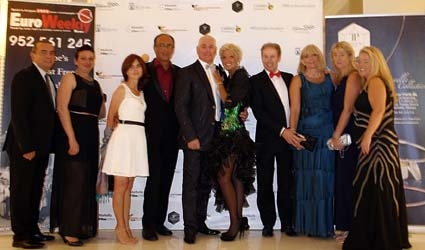 A SELECTION of the best short and feature films plus documentaries were brought to Marbella for the city’s International Film Festival.

A total of 800 films were whittled down to a selection of just 40 to showcase the talent of the world’s independent film makers.

With two screens showing the films throughout the day at the Marbella Trade Fair and Congress Centre (Palacio de Congresos), it has been the ideal chance for film lovers to discover some of the world’s upcoming talent.

Other events were held at the H10 Andalucia Plaza Hotel, Marbella Casino and other locations throughout the city and further afield, as many delegates took a trip to Coin to the Loasur studios.

The festival, which was first launched in 2006, is the flagship project of New World Trust, an organisation created to provide support for talented artists, including assistance in marketing, project and financial management, business angles, agents and distribution networking, and trying to overcome any other obstacles which potentially hinder the artist’s ability to create. This is why Euro Weekly News has been proud to sponsor the event and act as Official Media Partners.

One of the most important and awaited elements of the festival was the annual 24 Hour Film Challenge. In this event, talented film makers, create some outstanding work, all scripted, shot, edited, and submitted for screening in only 24 hours.

This year, the Festival aimed to increase participation by offering the challenge on-line, as well as on-location, allowing film makers from all over the world to make movies and show off their talent.

Marbella Film Festival Founder, Mac Chakaveh explained that the aim is to expand the film festival to other countries to obtain even greater exposure for the upcoming talent. The aim of organising the festival is to promote their work, give them tips on how to improve their film making, help them to produce their creations and take them to the screen, and most importantly, reach more people.

The directors of Marbella and Malaga film offices explained that they are part of the Andalucian Film Commission, which is managed by the Junta de Andalucia Regional Government.

In turn, Marbella Film Office is dependent upon MarbellaCity Hall and its Tourism Department. Its aim is to provide information and advice as well as processing the permits which filmmakers can need to film in public areas all for free. The permits for Marbella itself can be processed in advance so that everything is ready for when the team arrives in the province.

Both offices can put the filmmakers and their teams in touch with the people who they need to talk to in order to film in different areas of Malaga province, Andalucia and the rest of Spain.