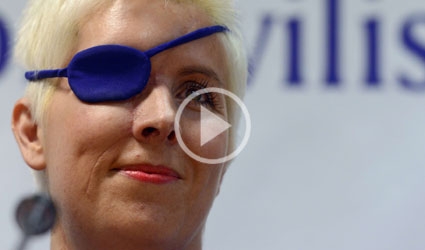 MADRID (Reuters) – Former Spanish Formula One test driver Maria de Villota, one of the few women to come close to the top of the sport, has been found dead in a hotel in Seville, a police spokeswoman said on Friday.

De Villota, who lost her right eye and fractured her skull in a horrific accident at a test in England in July last year, had likely died of ‘natural’ causes, the spokeswoman said, adding that an investigation was ongoing.

“We are assuming it was a natural death, but we cannot confirm anything,” the police spokeswoman said, adding that forensic scientists and police from the homicide unit would examine the scene.

Although the 33-year-old recovered from the life-threatening injuries sustained in the crash, she no longer competed and had instead become an inspirational figure for aspiring female drivers and was due to present a book detailing her experiences on Monday.

The daughter of former F1 racer Emilio De Villota, she was appointed test driver for Anglo-Russian team Marussia a few months before her crash.

She never took part in a general test with other drivers but was one of only a handful of women to have driven Formula One cars in the last decade. None, though, have come near to racing one in competition.

The news of her sudden passing stunned Spain and the motor racing world.

“I feel I owe it to her (to say something) because, out of the paddock and out of the motorsport bubble, she was an incredible character, she was a fighter,” Susie Wolff, a Williams development driver who had a test for the team last July and knew De Villota well, told Reuters.

“She had such a spirit for life and what she came through was a testament to her strength of character and her positive outlook,” added the Scot from the Japanese Grand Prix in Suzuka.

“After the accident she was so behind me and had such a lust for life, she was so happy to be alive and that she’d survived it and she had so many great plans for the future.

“I really don’t know what to say,” he said from Suzuka.

“Pray for her and her family and the whole motor sport family. She was really loved by everyone.”

“Dear friends. Maria has left us. She had to go to heaven like all the angels. We give thanks to God for the year and half more he allowed her to be with us.”

The crash occurred at Duxford airfield after De Villota had completed a test run and was returning to the mechanics. The car suddenly accelerated into the back of a team truck with her helmet taking much of the impact.

She was taken to Cambridge’s Addenbrooke’s hospital and had an emergency operation that began on a Tuesday afternoon and kept her in theatre until the following morning.

Speaking in public for the first time since the accident in October last year, an upbeat De Villota, who married her personal trainer Rodrigo Garcia Millan in July, said the best part of her life was still to come.

Wearing a patch over her eye socket and with her blonde hair cropped close to the skull, De Villota thanked all those who had helped and supported her and said she now believed she had “a new opportunity to live at 100 percent”.

She said she was determined to stay involved with Formula One in some form and being a role model for aspiring young female drivers was extremely important to her, she added.

“I have motor sport in my DNA and there’s no way I can stay away from that world,” she said.

“I want to keep fighting because I believe so strongly in women being part of motor racing.

“The crucial thing was to get back some optimism about the future, that’s what helped me to get my interior motor running again. I am sure that the best is still to come.”