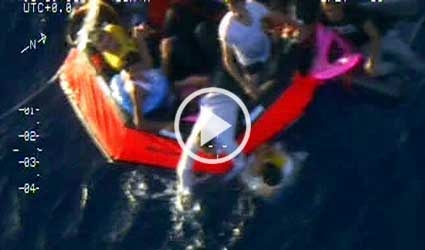 PALERMO, Sicily (Reuters) – Dozens of people died on Friday when a boat carrying around 250 migrants capsized between Sicily and Tunisia, in the second such shipwreck this month, the Italian coastguard said.

The Italian news agency ANSA reported that around 50 corpses had been sighted, including around 10 children, following the incident about 60 miles (100 km) south of the tiny island of Lampedusa.

Maltese Prime Minister Joseph Muscat told a news conference in Valletta there were indications at least 27 people had died “and the number is expected to rise, possibly drastically”.

At least 339 people drowned on October 3 when a boat carrying Eritrean and Somali migrants sank near Lampedusa, southwest of Sicily.

The Maltese navy said one of its ships had rescued 150 migrants from Friday’s wreck and an Italian navy vessel had saved 56. The most seriously injured were being taken by helicopter to Lampedusa.

Maltese authorities were coordinating the rescue operation, which was in international waters but in a Maltese rescue zone, and a Maltese ship was on the scene, a spokesman for the island state’s navy said.

The boat was spotted in difficulty by a Maltese military plane at around 1400 GMT, which dropped a liferaft.

“This is not just another wake-up call for Europe. This is the time for action,” Muscat said, adding he had spoken to Italian Prime Minister Enrico Letta to discuss the latest disaster.

“This is a European problem, not a problem for Italy or Malta only.”

Italy is asking for more European Union support and an overhaul of the bloc’s immigration rules after last week’s shipwreck.

Last week’s disaster was one of the worst in a protracted migrant crisis in which tens of thousands of people have arrived in flimsy, overcrowded boats in southern Italy, and some vessels wrecked. Lampedusa, midway between Sicily and Tunisia, has borne the brunt.

According to the U.N. High Commissioner for Refugees, 32,000 have arrived in southern Italy and Malta this year alone, around two thirds of whom have filed requests for asylum.

Earlier on Friday at least 500 more migrants in at least three separate boats arrived or were rescued on the way to different areas of Sicily.

Most migrants come from sub-Saharan Africa, but this year many are fleeing the civil war in Syria or political turmoil in Egypt and other parts of North Africa. Many are drawn by hopes of finding work in Europe and often do not stay in Italy.