Obama and Republicans search for a deal on U.S. fiscal impasse 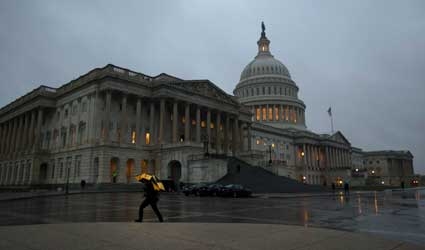 WASHINGTON (Reuters) – President Barack Obama and congressional Republican leaders inched toward resolving their fiscal impasse on Friday, but struggled to agree on the length and terms of a short-term deal to increase the U.S. debt limit and reopen the government.

Obama met Senate Republicans at the White House and spoke by phone to House of Representatives Speaker John Boehner as negotiations intensified on how to get hundreds of thousands of federal workers back on the job and extend the government’s borrowing authority past the October 17 limit.

It was hard to gauge the progress of talks, as all sides refused to divulge many of the specific details of what is being discussed.

But both sides spoke with new optimism about the possibility of avoiding a fiscal crisis. Lawmakers were expected to work through the weekend with a goal of finishing a deal by early next week.

Economists have warned that a debt default would create global economic chaos, and analysts warned on Friday that if the shutdown lasts more than a month, it would cause a sharp slowdown in fourth-quarter economic growth.

Obama wants the debt ceiling raised for longer than the six weeks first proposed by Republicans, and Republicans want a commitment to broader deficit-reduction talks from the White House.

“The two of them agreed that all sides need to keep talking,” White House spokesman Jay Carney told reporters after the call between Boehner and Obama. “It at least looks like there is a possibility of making some progress here.”

House Republicans will meet at the Capitol on Saturday morning to discuss their options after sending the White House a proposal that included the short-term increase in the debt limit that would clear the way for reopening the government.

The House Republican proposal called for cuts in programs like the Medicare health plan for seniors to replace two years of the automatic spending cuts known as “sequestration” agreed to last year by Congress, senior aides said.

“The good thing is the negotiations are ongoing. That is much more progress than has been the case lately,” House Majority Leader Eric Cantor of Virginia said.

But Carney said the short-term increase proposed by Republicans would not provide enough certainty for the economy and would put the country back on the verge of default during the end-of-year holiday season.

“A debt ceiling increase at only six weeks tied to budget negotiations would put us right back where we are today in just six weeks, on the verge of Thanksgiving and the obviously important shopping season leading up to the holidays,” Carney said.

At a White House meeting with Senate Republicans on Friday, Obama expressed concerns the proposed debt-limit extension was too short and also talked about the need for new revenues as part of any long-term deficit reduction plan, Republican Senator Orrin Hatch of Utah said.

Large portions of the U.S. government shut October 1 after Obama and Democratic lawmakers rejected House Republicans’ demands for delays to Obama’s healthcare reforms in exchange for temporary government funding. Thousands of government workers have been furloughed and parks and attractions shuttered.

Deals were struck on Friday to reopen three of the most famous landmarks, using state money and other funds. The Grand Canyon, Mount Rushmore and the Statue of Liberty will soon be open for visitors, as well as some parks in Colorado and Utah.