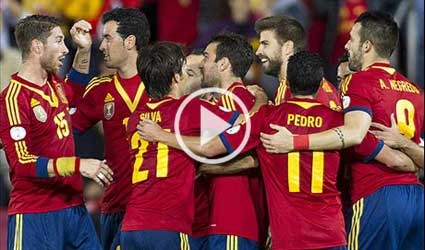 (Reuters) – Holders Spain moved to the brink of qualifying for next year’s World Cup when captain Xavi and substitute Alvaro Negredo struck in a laboured 2-1 win at home to Belarus in Group I on Friday.

The victory lifted Vicente del Bosque’s side three points clear of second-placed France with one match to play and a point against lowly Georgia in Albacete on Tuesday will secure the world and European champions a berth at the finals in Brazil.

Spain dominated against ultra-defensive Belarus, who are bottom of the group, but struggled to create clear chances until Xavi netted in the 61st minute with a powerful strike from the edge of the area that left goalkeeper Aleksandr Gutor rooted to the spot.

Centre back Sergio Ramos was the unlikely provider of the second goal 12 minutes from time when he found himself on the right wing and clipped over a perfect cross for Negredo to send a superb diving header low into the corner.

Sergei Kornilenko pulled a goal back for Belarus in the 89th minute from one of their few forays forward but it was nothing more than a consolation.

“We weren’t effective enough with the final pass but in the end we got the win and it’s a very important step towards the World Cup,” Xavi told Telecinco television.

“Alvaro’s goal gave us some breathing room and at the end the Belarus goal gave us a bit of a shock but it turned out fine. It’s tough when teams shut up shop at the back with all 10 players in their half.”

Xavi was captaining the side in the absence of goalkeeper Iker Casillas, who has fallen out of favour at his club Real Madrid and was replaced in the starting lineup by Barcelona’s Victor Valdes.

Del Bosque also handed a debut to Michu but the Swansea City forward made little impact before being replaced by Negredo in the 57th minute.

Spain’s clearest chance of an uninspiring first half fell to Negredo’s Manchester City team mate David Silva when his shot from just outside the area was comfortably saved by Gutor.

Centre back Gerard Pique, who had earlier been booked for handling, rode his luck just before the break when the ball appeared to strike his arm in the area and the referee waved away Belarus claims for a penalty.