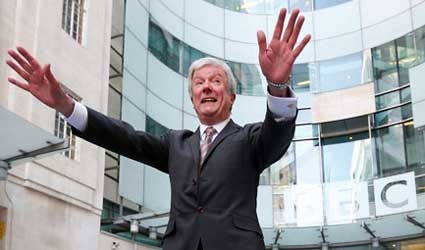 LONDON (Reuters) – The head of the BBC promised on Tuesday to refocus the world’s largest state-funded broadcaster on its core values – to inform, educate and entertain – after a year of battering by the public and parliament over a sex scandal and lavish executive payments.

In his first major speech since becoming director general six months ago, Tony Hall said the BBC had to cut costs by 20 percent by 2017 but also needed to find an additional 100 million pounds a year in savings to invest in the future.

He did not give details on where the savings would come from but said he aimed to simplify the management structure by, among other things, cutting back on the number of boards.

The BBC has been accused of being overly bureaucratic and top-heavy, wasting the license fees it receives from all British households with a television.

Hall acknowledged the BBC had made “very serious mistakes”.

“We are going to show the British public who pay for this service that we know – and we will never again forget – what we are here to do,” Hall said at BBC House.

“The people of this country make a bold and generous commitment in paying for the BBC. They own it, they love it, and they expect only the best from it.”

Hall said he aimed to strengthen the digital platform, double the audience for the BBC news service to 500 million people a week and boost arts programming.

Projects in the pipeline include revamping the BBC iPlayer so license fee payers can get a personalized on-demand service to watch programs not yet aired, as well as offering a 30-day catchup period and giving BBC Radio 1 a bigger role.

Hall also announced plans to launch BBC Store, a commercial service where people in Britain and overseas can buy programs online, and BBC Playlister to tag music on the BBC to make playlists using services like Spotify, Deezer and YouTube.

He unveiled plans to bolster the corporation’s television channels with increased investment in drama and entertainment programming and launching a BBC One +1 channel.

“Our audiences demand to be involved and expect to participate. In the future they will talk to us and we will listen,” Hall said.

Hall is seeking to rebuild public confidence in the BBC that was shaken last year when it emerged that Jimmy Savile, one of the corporation’s biggest stars of the 1970s and 80s, was a prolific child sex abuser over decades.

This triggered a police inquiry that has led to the arrest of 14 aging celebrities and show business figures from that era.

The scandal was exacerbated by revelations of large severance payments to departing executives from the publicly funded BBC that were criticized by British parliament.

Hall admitted his strategy – yet to be approved by the BBC Trust – would be tough. The aim was to make savings of 20 percent by 2017 with license fees frozen. Another 100 million pounds a year in savings would have to be found by redirecting resources, money and people.

“This will mean some hard choices and we’ll examine every penny and every pound,” he said.

Media analysts said Hall’s vision was imaginative but were disappointed to hear few details on costs.

“The strategy is bold and positive but it will not be easy as the costs involved will be considerable,” said Steve Hewlett, a media analyst and former executive with broadcaster ITV.