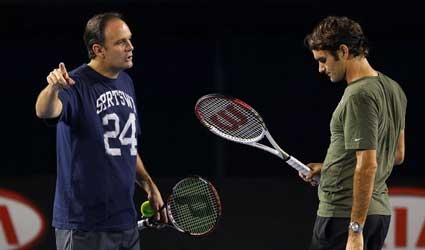 Roger Federer has split from his American coach Paul Annacone with the struggling Swiss former world number saying on Saturday that it was the best time to make a change.

“After a terrific 3-1/2 years working together, Paul and I have decided to move on to the next chapter in our professional lives,” the 32-year-old Federer said on his website (www.rogerfederer.com).

The announcement came two days after the world number seven was dumped out of the Shanghai Masters by France’s Gael Monfils.

Federer, winner of a record 17 grand slams, is battling to qualify for next month’s end-of-season ATP World Tour Finals for the 12th consecutive year.

“When we started together we had a vision of a three-year plan to win another Grand Slam title and get back to the number #1 ranking. Along with many other goals and great memories, these two main goals were achieved,” Federer said in a statement.

“After numerous conversations culminating at the end of our most recent training block, we felt like this was the best time and path for both of us.

“Paul remains a dear friend, and we both look forward to continuing our friendship. I want to thank Paul for his help and the value he has added to me and my team,” he added of the 50-year-old former world number 12.

Federer, who won his last grand slam title at Wimbledon in 2012 before claiming a silver medal at the London Olympics, has failed to reach the final of a major this season for the first time since 2002. His only tournament success was at the low-key Halle event.

He lost in the Australian Open semi-finals to Andy Murray, fell at the last-eight stage to Jo-Wilfried Tsonga in the French Open, suffered a shock second-round defeat at Wimbledon to Sergiy Stakhovsky before losing to Tommy Robredo in the U.S. Open fourth round.

Federer last held the number one ranking in October 2012 having taken it from Serbian Novak Djokovic that July.