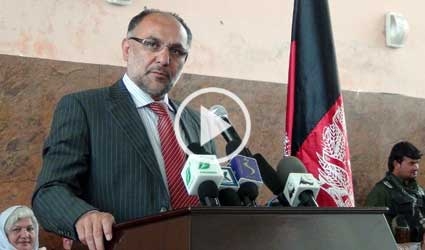 PUL-I-ALAM, Afghanistan (Reuters) – A bomb attack on a mosque in Afghanistan killed the governor of a province south of the capital, Kabul, on Tuesday as he was making an address on the first day of the Muslim holiday of Eid al-Adha, officials said.

Arsala Jamal was governor of Logar province, a strategically important province on the southern approaches to Kabul and home to one of Afghanistan’s richest mines.

He had previously been governor of violence-plagued Khost province on the Pakistani border and the killing of such a senior official will raise new fears for Afghanistan’s security as foreign troops prepare to leave by the end of next year.

“When the governor was giving a speech it detonated. He is martyred,” said Jamal’s spokesman, Din Mohammad Darwish. He said one other person had been killed.

No one claimed responsibility.

Jamal was close to President Hamid Karzai and was a senior official in his successful campaign for re-election in 2009.

Darwish said the bomb had been planted inside the mosque and detonated remotely. Police initially said a suicide bomber had been responsible.

A group supporting Afghanistan’s administrative development said it suspected Jamal’s work to get the Aynak copper mine in Logar province up and running was the reason he was killed.

“Jamal… had done considerable work for the excavation of copper at the Aynak mine,” the Independent Directorate of Local Governance agency said in a statement.

“These activities were not acceptable to the enemies of the country and that is why they martyred him on the first day of Eid al-Adha,” it said. It did not elaborate on who it thought was behind the attack.

Taliban insurgents fighting to expel foreign forces have stepped up attacks on government targets ahead of the withdrawal of foreign combat troops by the end of 2014.

The Taliban have rejected government calls for peace talks and have denounced a presidential election due in April as illegitimate.

A Chinese consortium is running the Aynak mine under a $3 billion deal agreed in 2007.

It is Afghanistan’s largest foreign investment project but Taliban attacks on the site have prevented work from getting going.

The Chinese investors in August demanded a review of the deal, putting the project at risk. Production was originally scheduled to start this year, but now is seen as unlikely before 2019.

The Taliban’s elusive leader, in a message to mark the Eid holiday, urged his fighters to step up their fight against the government.

“My advice to all mujahideen is to stand up to the enemy firmer than before,” Mullah Omar said in the message, distributed via email, referring to Muslim holy fighters.