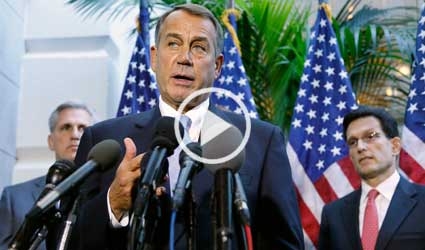 WASHINGTON (Reuters) – Republicans in the U.S. House of Representatives failed to reach internal consensus on Tuesday on how to break an impasse on the federal budget that could soon result in an economically damaging default on the country’s debt.

House Republican leaders proposed a plan to reopen the government and avoid debt default but it was rejected in a meeting with rank and file lawmakers. The plan differed in a few important details from one in the U.S. Senate.

House Speaker John Boehner said they had not reached any decisions on how to proceed, but were determined not to allow a default.

“There are a lot of opinions about what direction to go. There have been no decisions about exactly what we will do,” Boehner told reporters.

Senate leaders said they were close to an agreement on their side that would reopen the government, in partial shutdown for two weeks, and extend the debt ceiling by the deadline on Thursday when the U.S. Treasury says it will reach its borrowing limit.

The confusion complicated 11th-hour talks on the government shutdown and the potential default. Senate Democrats and the White House have rejected the House Republican plan. President Barack Obama will meet with House Democratic leaders at 3:15 p.m. ET (2015 BST) to discuss their options.

House Republican aides said the proposal floated on Tuesday would have funded the government through January 15, and raised the debt ceiling by enough to cover the nation’s borrowing needs through February 7, similar to the Senate plan.

But unlike the Senate, it would include a two-year suspension of the medical device tax included in Obama’s healthcare law, and a requirement that members of Congress and the administration be covered under the law.

The House version also would not allow the U.S. Treasury to renew its extraordinary cash management measures to stretch borrowing capacity for months, which had tentatively been allowed under the Senate plan.

The White House said the tentative House plan was not workable and was designed to appease the Tea Party faction in the Republican Party who have demanded that any concessions on the budget be linked to changes in the healthcare law.

“The president has said repeatedly that members of Congress don’t get to demand ransom for fulfilling their basic responsibilities to pass a budget and pay the nation’s bills,” said White House spokeswoman Amy Brundage.

“Unfortunately, the latest proposal from House Republicans does just that in a partisan attempt to appease a small group of Tea Party Republicans who forced the government shutdown in the first place,” she said.

The two Senate leaders negotiated the tentative Senate plan on Monday, and Reid said he was optimistic about reaching a final deal this week.

“There are productive negotiations going on with the Republican leader. I’m confident that we’ll be able to reach a comprehensive agreement this week in time to avert a catastrophic default on the nation’s bills,” Reid said on the Senate floor.

The plans in both houses of Congress would have resolved the immediate fiscal crisis, and set up a new round of budget talks that would try to strike a bargain by year’s end.

The markets weathered the turmoil with only moderate losses. The Dow Jones industrial average was down 28 points, or 0.18 percent. The Standard & Poor’s 500 Index was down 1.5 points, or 0.09 percent.