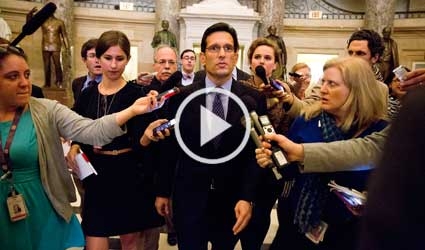 WASHINGTON (Reuters) – A month of combat in the U.S. Congress over government spending showed signs on Monday of giving way to a Senate deal to reopen shuttered federal agencies and prevent an economically damaging default on federal debt.

Senate Majority Leader Harry Reid, a Democrat, and his Republican counterpart, Mitch McConnell, ended a day of constant talks with optimistic proclamations, as details leaked out of the pact they were negotiating.

“We’ve made tremendous progress,” Reid said at the end of a Senate session during a federal holiday, underscoring the urgency of settling a fiscal crisis that was nearing a Thursday deadline. The U.S. Treasury Department estimates it will reach a $16.7 trillion borrowing limit on October 17.

“We hope that with good fortune … that perhaps tomorrow will be a bright day,” Reid said, hinting at the possible Tuesday announcement of a bipartisan Senate deal.

McConnell, who has been a fierce critic of Reid all year instead had a smile on his face and upbeat words. “We’ve had a good day; had a good day yesterday,” he said of his work with Reid.

The plan under discussion would promptly end a partial government shutdown about to enter its third week. It also would raise the debt ceiling by enough to cover the nation’s borrowing needs at least through mid-February 2014, according to a source familiar with the negotiations.

Government operations would be funded through the middle of January, keeping in place the across-the-board “sequester” spending cuts that took effect in March, though government agencies would have more latitude to ease their impact. It would also set up a new round of budget talks that would try to strike a bargain by year’s end.

With the Reid-McConnell talks continuing, these details were subject to change, according to Senate aides.

Democrats look to have fended off any major changes to President Barack Obama’s signature health law, something that could fuel resistance, particularly by conservative Republicans in the House of Representatives who had insisted on delaying “Obamacare” as a condition of continued government funding.

House Speaker John Boehner could face an insurrection that could threaten his position as Washington’s top Republican if he tries to advance a bill over the objections of rank-and-file conservatives in that chamber.

Boehner has not publicly commented on the Senate negotiations. A spokesman said the House would review whatever the Senate passes.