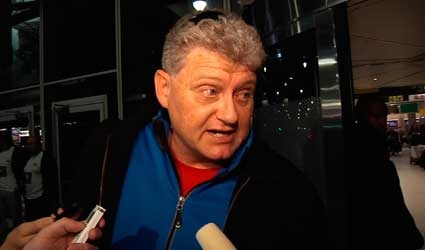 NEW YORK (Reuters) – The father of Edward Snowden said on Wednesday that the former U.S. spy agency contractor has more secrets to share and should stay in Russia “to make sure the true story is told.”

Father Lon Snowden spoke at John F. Kennedy International Airport in New York shortly after returning to the United States from a weeklong visit with his son in Moscow. It was the first time they saw one another since Edward Snowden, an ex-National Security Agency contractor, was given temporary asylum in Russia earlier this year after leaking sensitive data on U.S. security agencies’ operations.

Asked what he told his son during the visit, Snowden told reporters: “To stay, but that’s my advice. It’s not necessarily what my son will do. He’s comfortable. He’s happy. And he’s absolutely committed to what he has done.”

The younger Snowden’s revelations about the reach and methods of the NSA, including the monitoring of vast volumes of Internet traffic and phone records, have upset U.S. allies from Germany to Brazil. Admirers call him a human rights champion and critics denounce him as a traitor.

“There’s much more to be shared,” Lon Snowden said.

Staying in Russia, Snowden said, allows his son “to continue to push these issues forward, to make sure the true story is told.”

“He’s not a fugitive. He’s a legal asylee of the Russian Federation and the press needs to get that right and I think our government understands that at this point.”

Russia has kept secret where the Snowdens met during the visit as well as where the son has been living. Moscow also has kept the media and public away from Edward Snowden, who has been shepherded by a lawyer believed to have ties with Russia’s secret services.

Russian President Vladimir Putin, a former KGB spy, has repeatedly said that Russia would shelter Snowden only if he stopped harming the United States. But he has used the case to accuse Washington of preaching to the world about rights it does not uphold at home.

Lon Snowden’s flight home left from Sheremetyevo, the airport where his son spent nearly two months in the international zone before getting temporarily asylum in August.