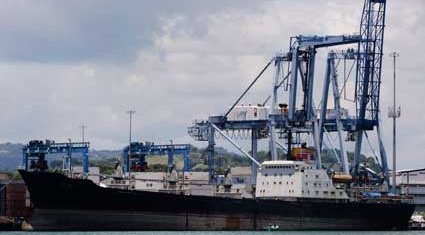 The crew’s return would mark the end of a bizarre chapter between the three countries that provoked international controversy after the ship was seized in July for smuggling military-style arms under 10,000 tons of sugar.

Repairs to the ship are nearly completed so the crew can sail back in the same vessel, Foreign Minister Fernando Nunez Fabrega told Reuters.

While the U.N. Security Council has yet to decide on penalties against Cuba, given a 7-year-old ban against arms transfers to North Korea due to the country’s nuclear weapons program, the arms will likely be sold or given away, Nunez Fabrega added.

In July, the North Korean crew sabotaged its electrical system and bilge pumps after Panamanian investigators stopped the ship near the Atlantic entrance to the Panama Canal on suspicion it was carrying drugs after leaving Cuba.

The North Korean flagged ship, known as the Chong Chon Gang, will be returned after the vessel’s owner formally signs off on the plan, Nunez Fabrega said.

Panama has issued visas for two North Korean diplomats to arrive shortly and complete the procedure.

Meanwhile, 33 of the 35 crew members, held at a former U.S. army base on charges of threatening Panama’s security, “appear to be ignorant of what was in the cargo”, Nunez Fabrega said.

“As a result, if the Attorney General determines they are not criminally responsible for their actions, they cannot be prosecuted,” he said.

Both the captain, who tried to slit his throat after Panamanian investigators seized the ship, and his deputy consistently refused to give statements during their detention, officials said. As a result, they might still face trial.

The whole crew refused efforts to put them in contact with their families, said Nunez Fabrega.

“Their families in North Korea must think they sunk with the boat,” he said.

After the ship was seized, Havana requested that Panama release it, claiming the vessel carried only the sugar cargo as a donation to the people of North Korea.

But once the arms were discovered beneath the sugar, the Cuban government acknowledged it was sending “obsolete” Soviet-era weapons, including two MiG jets, 15 MiG engines and nine anti-aircraft missiles, to be repaired in North Korea and returned.

An analysis by 38 North, a website run by the U.S.-Korea Institute at the Johns Hopkins School of Advanced International Studies in Maryland, found the weapons shipment was larger than Cuba acknowledged and that many of the weapons were in “mint condition”.

The analysis concluded the arms were intended for North Korea’s own use.

Inspections of the equipment show they were “obviously not obsolete” as Cuba maintained, said Nunez Fabrega.

“One of the jets had kerosene in them, showing it was recently used,” he said. “Of the 15 jet engines, 10 were in immaculate condition.”

Since then, Panama has had “zero” communication with Havana, although it made at least four attempts. Havana also cancelled a scheduled meeting between government officials from both countries at the United Nations last month.

“It was like talking to a brick wall,” Nunez Fabrega said.

A six-member U.N. team inspected the weapons in August but still seeks answers from Cuba about the shipment to provide a U.N. sanctions committee a full report.