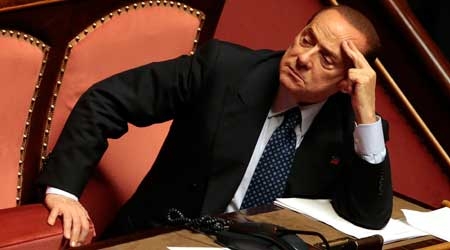 However, since Berlusconi is a senator, the court’s decision will have no immediate effect and his expulsion from the Senate will depend on a separate vote in the upper house of parliament, expected to take place next month.

Saturday’s ruling reflected the prosecution’s request for a two-year ban. Berlusconi’s lawyers, who said they would appeal the decision to the supreme court, had asked for a one-year ban, the minimum under the law being applied in the Milan case. The maximum would have been three years.

The four-year sentence was commuted to one year, and, if the Senate expels him, Berlusconi, 77, will spend the year either under house arrest or in community service.

In the August 1 ruling, the supreme court confirmed the conviction but ordered a further judicial review of a ban on holding public office imposed for the same offence.

The upper house’s vote next month will effectively supersede the Milan court’s decision because it will be based on a separate law, which, if he is expelled, would ban Berlusconi from public office for six years.

Losing his seat in the Senate would deprive Berlusconi, who is fighting a conviction for paying for sex with a minor among other legal cases, of his parliamentary immunity from arrest.

A special Senate committee opened the way earlier this month for a motion to expel Berlusconi.

The Senate is dominated by Berlusconi opponents from both the left and the anti-establishment 5-Star Movement and is expected to vote to strip him of his seat.

The decision over Berlusconi’s future has been one of the most sensitive issues facing parliament.

The stated reason for the break was a disagreement over tax policy, but the weeks of tension over his impending expulsion helped poison the climate in the broad left-right coalition.

The August supreme court ruling involved inflated invoices at Berlusconi’s Mediaset broadcasting empire and was the first definitive sentence he had received after dozens of previous trials on charges ranging from tax to sex offences.

The billionaire has protested his innocence, accusing magistrates of persecuting him since his entry into politics 20 years ago.