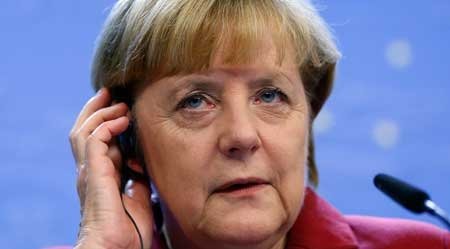 BERLIN (Reuters) – The United States may have bugged Angela Merkel’s phone for more than 10 years, according to a news report on Saturday that also said President Barack Obama told the German leader he would have stopped it happening had he known about it.

Germany’s outrage over reports of bugging of Merkel’s phone by the U.S. National Security Agency (NSA) prompted it to summon the U.S. ambassador this week for the first time in living memory, an unprecedented post-war diplomatic rift.

Der Spiegel said Merkel’s mobile telephone had been listed by the NSA’s Special Collection Service (SCS) since 2002 – marked as “GE Chancellor Merkel” – and was still on the list weeks before Obama visited Berlin in June.

In an SCS document cited by the magazine, the agency said it had a “not legally registered spying branch” in the U.S. embassy in Berlin, the exposure of which would lead to “grave damage for the relations of the United States to another government”.

From there, NSA and CIA staff were tapping communication in the Berlin’s government district with high-tech surveillance.

Quoting a secret document from 2010, Der Spiegel said such branches existed in about 80 locations around the world, including Paris, Madrid, Rome, Prague, Geneva and Frankfurt.

The magazine said it was not clear whether the SCS had recorded conversations or just connection data.

Obama apologised to Merkel when she called him on Wednesday to seek clarification on the issue, Der Spiegel wrote, citing a source in Merkel’s office.

Frankfurter Allgemeine Sonntagszeitung also said Obama had told Merkel he had not known of the bugging.

“We’re not going to comment on the details of our diplomatic discussions,” said Caitlin Hayden, a spokeswoman for the National Security Council at the White House.

The rift over U.S. surveillance activities first emerged earlier this year after reports that Washington had bugged European Union offices and had tapped half a billion phone calls, emails and text messages in Germany in a typical month.

But it appeared close to resolution after Merkel’s government said in August – just weeks before a parliamentary election – the United States had given sufficient assurances they were upholding German law.

Germany will send intelligence chiefs to Washington next week to seek answers on the allegations around Merkel’s phone.