Ally of Georgia’s billionaire PM to be president 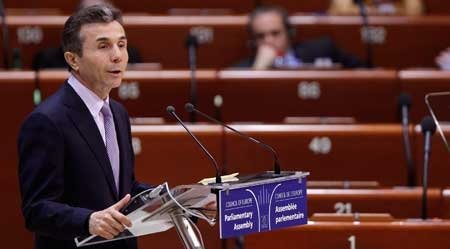 His victory will put Georgian Dream in charge of both the presidency and the government for the first time, a year after it ousted Saakashvili’s cabinet at the polls.

Both exit polls put his nearest rival, former parliamentary speaker and Saakashvili ally David Bakradze, on around 20 percent. Margvelashvili had required only one vote over 50 percent to secure victory outright and avert a run-off.

“It seems that the picture is clear, and the final results will not be much different from the exit polls,” Bakradze said in televised comments.

Accepting defeat, he said: “I congratulate Georgy Margvelashvili on his victory. As the leader of the opposition, I will be ready to work with the new president.”

A 44-year-old academic brought into government last year as education minister, and then promoted to deputy premier, Margvelashvili owes his rapid rise entirely to Ivanishvili.

His main foreign policy goal is to pursue close ties with the West and Russia, a balance that has long eluded Georgia.

The departure of Saakashvili, who had served the maximum two terms, should ease policy-making after a year of squabbling between him and Ivanishvili, Georgia’s richest man.

Ivanishvili says he will also step aside soon, adding to uncertainty. This worries Europe because it gets Caspian oil and gas via pipelines which run through the South Caucasus country of 4.5 million which is also strategically important for Russia.

Constitutional changes will tilt power from the presidency toward the government and parliament, but the president will have a diplomatic role as head of state, and will be commander-in-chief of the armed forces.

Saakashvili, 45, strengthened democracy in Georgia and launched economic reforms after coming to power following the bloodless “rose revolution” in 2003, but lost a five-day war to Russia in 2008 and failed to reform the justice system.

Ivanishvili, 57, entered politics only two years ago but says his job will be complete when Saakashvili departs.

He could, however, wield influence from the sidelines, not least because his estimated $5.3 billion (3.2 billion pounds) fortune – equivalent to about a third of Georgia’s GDP – gives him vast influence.