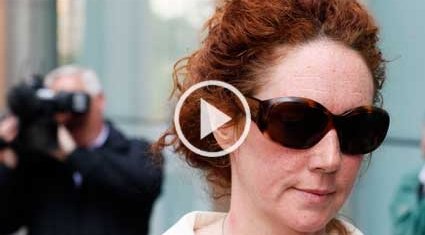 LONDON (Reuters) – The trial of Rupert Murdoch’s former British newspaper chief and Prime Minister David Cameron’s ex-media head begins on Monday in what will be Britain’s most high-profile and eagerly-awaited criminal case in years.

Rebekah Brooks and Andy Coulson, both former editors of Murdoch’s now defunct News of the World tabloid, are accused of conspiring to illegally access voicemail messages on mobile phones belonging to politicians, the rich and famous, as well as victims of crime and ordinary people, to secure exclusives.

They deny all charges.

The scandal surrounding phone-hacking has sent shockwaves through the top echelons of the British establishment and shaken Murdoch’s News Corp empire.

The furore has already revealed the close ties between Britain’s press barons, police chiefs and senior politicians, and prompted a year-long public inquiry into newspaper ethics. The industry is still at loggerheads with the government over how it should be regulated.

Detectives launched an investigation in January 2011 and since then more than 125 people have been arrested and more than 40 charged with offences.

The most prominent are Coulson and Brooks, a close friend of Cameron. He attended her wedding in 2009 along with the then-Prime Minister Gordon Brown.

Brooks was the first female editor of Murdoch’s top-selling Sun paper and had risen to become head of News International, News Corp’s British newspaper arm, when the furore over phone-hacking arose, leading to her resignation.

Coulson, who quit the News of the World in 2007, had acted as Cameron’s communications chief until he too resigned in 2011 saying the issue had become a distraction for the government.

They were both arrested in July 2011 and later charged with conspiracy to illegally intercept communications.

Coulson is also charged with two counts of conspiracy to commit misconduct in public office.

Joining them in the dock accused of some of the charges are Stuart Kuttner, the long-time former managing editor of the News of the World; Ian Edmondson, the tabloid’s ex-news editor; Clive Goodman, former royal editor at the News of the World; Cheryl Carter, Brooks’s personal assistant; Brooks’s husband Charlie; and Mark Hanna, News International’s head of security.

On Monday, the jury are due to be chosen for the six-month trial with prosecutors expected to outline the case against the accused on Tuesday.

Dozens of other journalists are due to go on trial next year following the conclusion of this case, while police are also actively considering bringing corporate charges against Murdoch’s British newspaper business.