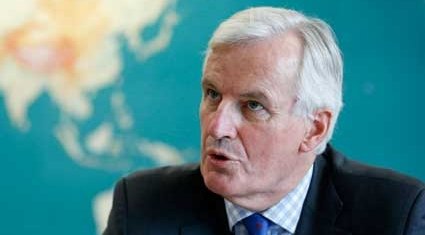 BRUSSELS (Reuters) – The European Commission is ready to compromise on how many banks will fall directly under the scope of the euro zone’s banking resolution authority, potentially limiting it to the largest institutions, the EU’s financial markets chief says.

Michel Barnier, the European commissioner for financial regulation and the single market, said he was prepared to compromise with Germany, which has strong reservations about a single resolution authority having the power to shut down small local banks, such as its ‘Sparkassen’ lenders.

“We can discuss the scope and which banks are covered, and maybe there could be room to have certain differentiation in how the rules are applied,” Barnier told Reuters in an interview.

Such a limiting of the scope would mirror how the supervisory role of the European Central Bank has been curtailed to direct oversight of the euro zone’s largest institutions.

The ECB, which will take over as the primary banking supervisor (SSM) from November 2014, will have primary responsibility for just the 130 largest banks, which together represent 85 percent of euro zone bank assets.

But if it wants to, the ECB would be able take over supervision of any of the single currency zone’s 6,000 banks from the national supervisors if it identifies problems.

Barnier did not mention a specific number in relation to the resolution authority, but indicated a similar set up would apply, while also warning that small banks could still cause major problems for the region’s banking sector.

“We will be looking for compromises here and I will be open to some differentiation. But what I said is that it’s not always the big banks that cause the problems” he said.

“We should always remember that the SSM, if it sees a problem in a bank that is not directly under its supervision, it can identify and bring it up for discussion,” he said, suggesting a similar process would apply for resolution.

The single resolution authority, with a special fund for closing down banks, is to be the second pillar of a euro zone ‘banking union’ that advocates hope willo restore confidence in the sector and help credit flow to the economy again.

Euro zone policymakers want such an authority to be operational from 2015, after stress tests on the region’s banks have been carried out. The resolution authority would have the power to call for the recapitalisation or winding up of any problem banks, complementing the ECB’s supervisory powers.

The sort of compromise sketched out by Barnier would remove one major obstacle to setting up the resolution body.

But for the resolution mechanism to exist, policymakers also need to agree who should have the executive power to decide on the closure of banks and how to make sure that the costs would not burden euro zone taxpayers.

To avoid a lengthy and risky process of changing the EU treaties to set up a new EU institution especially for that purpose, the Commission has proposed that the EU executive arm itself could take the final decision on bank resolution.

Berlin does not like that idea. But Barnier said there were no other workable proposal for the moment.

“We need a European institution to push the button. If somebody gives me a better idea (than the Commission), I’m ready to take it,” he said.

To make sure there is money to close a bank, the resolution authority would have a resolution fund, that would be financed from fees from banks themselves.

The discussion now focuses on how to ensure adequate funds for winding down banks before enough money accrued from bank fees in the fund.