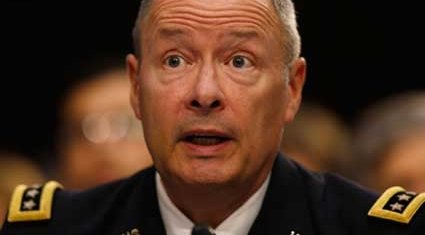 WASHINGTON (Reuters) – When top U.S. intelligence officials testified at a congressional hearing weeks ago, the public uproar was over the National Security Agency collecting the phone and email records of Americans.

But when the NSA director and other spy chiefs appear at a House Intelligence Committee hearing on Tuesday it will be against a backdrop of angry European allies accusing the United States of spying on their leaders and citizens.

The most prominent target appears to have been German Chancellor Angela Merkel, whose mobile phone was allegedly tapped by the NSA.

More than any previous disclosures from material given to journalists by former NSA contractor Edward Snowden, the reports of spying on close U.S. allies have forced the White House to promise reforms and even acknowledge that America’s electronic surveillance may have gone too far.

“We recognize there needs to be additional constraints on how we gather and use intelligence,” White House spokesman Jay Carney said on Monday.

U.S. Senator Dianne Feinstein, who chairs the Senate’s intelligence committee, joined the ranks of critics on Monday, expressing outrage at U.S. intelligence collection on allies, and pique that her committee was not informed.

“With respect to NSA collection of intelligence on leaders of U.S. allies – including France, Spain, Mexico and Germany -let me state unequivocally: I am totally opposed,” said Feinstein, who appeared to confirm U.S. spying on Merkel’s communications since 2002.

The White House is conducting a review of intelligence programs prompted by disclosures about top secret spying programs to the media by Snowden, who is living in Russia, out of reach of U.S. attempts to arrest him.

Their testimony will cover NSA programs and potential changes to the Foreign Intelligence Surveillance Act, which regulates electronic eavesdropping.

“The House Intelligence Committee continues to assess a number of proposals to improve transparency and strengthen privacy protections to further build the confidence of the American public in our nation’s FISA programs,” said Susan Phalen, spokeswoman for Republican committee Chairman Mike Rogers.

The Senate Intelligence Committee conducted a similar hearing in late September at which Feinstein said proposals included putting limits on the NSA’s phone metadata program, prohibiting collection of the content of phone calls, and legally requiring that intelligence analysts have a “reasonable articulable suspicion” that a phone number was associated with terrorism in order to query the database.

Heather Conley, director of the Europe Program at the Center for Strategic and International Studies and a former deputy assistant secretary of state for Europe, said the administration needed to be more proactive in handling the uproar.

“The administration has been completely reactive to these leaks,” she said.

The allegations of U.S. spying on Merkel and other leaders are likely to have a lasting impact on relations, Conley said.

In the last several years, Europeans have been disappointed with the Obama administration over its failure to close the U.S. detention center at Guantanamo Bay, Cuba and its use of drone strikes to kill terrorism suspects. The spectacle of the recent federal government shutdown also dented U.S. prestige in Europe.

“It’s just raising really big doubts, uncertainties and question marks about not only the president’s leadership but whether the United States is a reliable ally,” Conley said.