U.S. spy agency’s defence: Europeans did it too 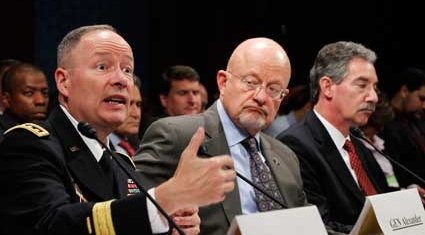 WASHINGTON (Reuters) – The political uproar over alleged U.S. eavesdropping on close European allies has produced an unusual defence from the National Security Agency: NSA says it was the Europeans themselves who did the spying, and then handed data to the Americans.

It is rare for intelligence officials to speak in any public detail about liaison arrangements with foreign spy agencies because such relationships are so sensitive. Even more unusual is for the United States to point fingers at partners.

But that is what NSA Director General Keith Alexander did at a public congressional hearing on Tuesday when, attempting to counter international complaints about the agency’s alleged excesses, he said its sources for foreign telecommunications information included “data provided to NSA by foreign partners.”

Alexander’s disclosure marked yet another milestone in NSA’s emergence from the shadows to defend its electronic surveillance mission in the wake of damaging revelations by former agency contractor Edward Snowden.

“It is true that in general we stay close-mouthed about intelligence liaison relationships and we only speak in the most general terms about sharing things with our friends and allies,” said Paul Pillar, a former senior CIA analyst.

But, he said, there was nothing wrong in correcting information that was out in public, even though Alexander probably “created or exacerbated some political problems” for a number of European allies with his comments.

“Given the hypocrisy being exhibited by the Europeans in saying they are ‘shocked, shocked’ that these sorts of things go on – allies spying on allies – I don’t think we should feel much compunction about having them feel a little bit of domestic political heat if that is necessary to set the story straight in one of our own congressional hearings,” Pillar said.

One U.S. official said that before going public with the revelation that telecommunications metadata was collected and supplied to the United States by foreign governments like France and Spain, the Obama administration consulted with the governments concerned. The official spoke on condition of anonymity.

Metadata refers to information about a phone call or email – the length of a call and the number dialled, for example – that does not include the communication’s actual content.

A second U.S. official said that, regardless of foreign governments’ reactions, some Obama administration officials wanted to make the information public anyway because they were disappointed at how allies were willing to let Washington take the heat for surveillance activities in which they themselves were partners.

Since early June, the NSA has been forced to defend its eavesdropping operations in public after Snowden leaked information about top-secret spy programs that collect phone, email and social media records, including those generated by Americans, to writers and media outlets, including Britain’s Guardian and the Washington Post.

The NSA continues battling the perception its programs are large and intrusive. The Post reported on Wednesday that the agency has tapped directly into communications links used by Google and Yahoo to move huge amounts of email and other user information among overseas data centres.