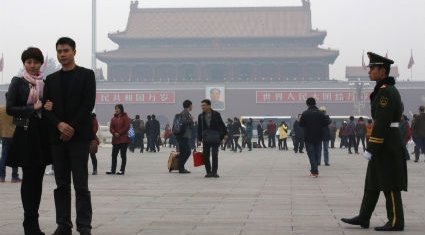 Meng Jianzhu, a member of the 25-member Politburo responsible for domestic security, said the East Turkestan Islamic Movement was behind the attack. This is the first time Beijing has accused the group of carrying out the attack.

On Monday, an SUV ploughed through bystanders on the edge of the capital’s iconic Tiananmen Square and burst into flames, killing the three people in the car and two bystanders, in what the government called a terrorist attack.

Beijing police have arrested five people it says were radical Islamists who were planning a holy war. Security has been strengthened in both Beijing and in Xinjiang, the restive far western region the Uighurs call home.

“The group that stood behind the scenes inciting it was the East Turkestan Islamic Movement,”

Many Uighurs call Xinjiang East Turkestan, and the government often blames the frequent outbreaks of violence there on extremists agitating for an independent state.

Foreign Ministry spokeswoman Hua Chunying said China was facing a clear danger from the East Turkestan Islamic Movement, which she added also operated outside of the country.

“Members of the organisation have for a long time engaged in terrorist acts in South Asia, Central Asia, West Asia and other regions. It has links to many international extremist terrorist groups,” she told a daily news briefing.

“It is China’s most direct and realistic security threat.”

Police stepped up checks at Beijing’s oldest mosque for Friday prayers, searching bags of anyone who looked Uighur, as part of heightened security across the capital.

Some experts have expressed scepticism about China’s characterisation of the Tiananmen Square incident as a premeditated and coordinated attack.

“If it’s a deliberate act, it’s unsophisticated,” said Joanne Smith Finley, a lecturer in Chinese studies at Newcastle University who studies Xinjiang. “It doesn’t carry any of the hallmarks that we would expect to see if it was something that was plotted and carefully deliberated with overseas extremists.”

The United Nations and United States placed the East Turkestan Islamic Movement on lists of terrorist organisations after the September 11, 2001, attacks.

The group entered the public eye ahead of the 2008 Beijing Olympics, when it said it had caused a series of fatal explosions across the country.

Police identified the driver of the SUV as Usmen Hasan, whose name suggests he is a Uighur, and said his mother and wife were in the car with him, along with devices filled with gasoline and a flag with “extreme religious content” on it.

At least 42 people were wounded.

Exiled Uighur leader Rebiya Kadeer told Reuters this week that caution should be exercised over the government’s account, adding she did not believe any kind of organised extremist Islamic movement was operating in Xinjiang.

Xinjiang, a sprawling, desert-like region that borders Central Asian nations that were part of the former Soviet Union as well as Afghanistan and Pakistan, has been beset by violence, blamed by China on Uighur separatists and extremists.

In 2009, nearly 200 people were killed in the Xinjiang capital, Urumqi, in rioting between Uighurs and the majority Han Chinese.

The East Turkestan Islamic Movement has been accused by the United States and China of having ties to al Qaeda, but there is disagreement among security experts as to the nature of the group and whether ties with al Qaeda and other terrorist organisations really exist.

Rights organisations have said there is little concrete evidence that the group has carried out most of the attacks it has been blamed for, and that Beijing uses the group as an excuse to push repressive policies on Uighurs.