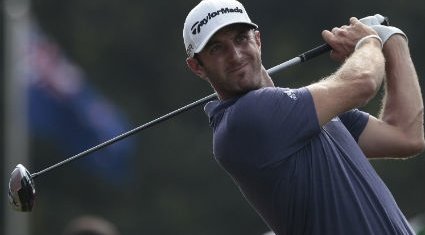 SHANGHAI (Reuters) – Long-hitting American Dustin Johnson matched the Sheshan Golf Club course record to surge into a commanding five-stroke lead after the second round of the $8.5 million WGC-HSBC Champions tournament on Friday.

On a day when first round leader Rory McIlroy’s season-long struggles returned to haunt him on the back nine and pushed the Northern Irishman back into a tie for second with Americans Bubba Watson and Boo Weekley, Johnson was in a class of his own.

He plundered six birdies in the first seven holes en route to a nine-under-par 63 on another pleasant day at Sheshan to rocket up the leaderboard after ending the first day in a tie for eighth.

Johnson is an aggressive player and he vowed to try to increase his lead, rather than protect it, over the final two rounds.

He has won seven times on the PGA Tour but is perhaps best known for blowing a chance to win the 2010 U.S. PGA Championship when he received a two-stroke penalty for grounding a club in a sandy lie on the 72nd hole that cost him a place in a playoff.

McIlroy, meanwhile, had threatened to run away with the tournament when he recorded three successive birdies to charge to 10-under after eight holes.

However, his swing deserted him on the back nine. A poor drive at the difficult par-four 11th led to a bogey and it was a struggle from that point on as he battled to an even-par 72.

McIlroy identified his drive at the par-four 13th as the turning point of his round.

“I hit a bad drive up the left and that sort of knocked my confidence a little bit and I started to struggle from there,” he admitted.

“I just hit a couple of bad shots and then I guess I just let it affect me a little bit and then I started to doubt myself sometimes.

“I didn’t hit a lot of quality shots on the back nine. I missed the last six greens in a row, so a bit of work is needed on the range this afternoon.”

Weekley (67) made a sluggish start, hitting the ball poorly by his own admission, but a wayward shot into the water at his fifth hole seemed to light a fire inside him.

He sank a 25-footer to save par and promptly reeled off three straight birdies from his seventh hole.

Weekley, a self-confessed redneck from the Florida Panhandle region, was asked whether he enjoyed the Chinese culture.

“It’s fun. Just can’t understand them,” he said in his thick southern drawl, before adding he had no plans for sightseeing trips in China, because “I don’t need to see nothing”.

Watson, who hails from the same area as Weekley, shot a 69 that included a double bogey from the middle of the fairway at the 10th.

Japanese prospect Hideki Matsuyama pulled out before the round due to a back injury.