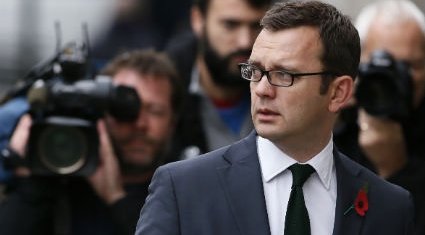 LONDON (Reuters) – Andy Coulson, then editor of Rupert Murdoch’s News of the World, instructed a journalist working on a story about a celebrity to “do his phone”, a jury trying Coulson and others for phone-hacking was told on Friday.

Coulson, who after leaving the News of the World went on to be Prime Minister David Cameron’s media chief, and Brooks, who rose to be chief executive of News International, also face two charges each of making illegal payments to public officials.

In total, eight defendants are in the dock on various charges related to phone-hacking, illegal payments for stories, and hindering police investigations. They all deny the charges.

The Old Bailey, England’s Central Criminal Court, heard that in May 2006, the paper was planning to run an exclusive story about the private life of Calum Best, the son of former Manchester United football star George Best.

During an email exchange with Ian Edmondson, a former journalist also on trial, Coulson discussed whether Best might leak the story to others.

“Do his phone,” Coulson wrote in an email shown to the jury.

Prosecutor Andrew Edis told the jurors they would have to weigh up what he meant.

Earlier, the court heard the News of the World had hacked the phones of politicians, royal aides, celebrities, actors and high-profile sportsmen.

The court also heard the paper had hacked the phone of Hannah Pawlby, an adviser to former Home Secretary Charles Clarke, wrongly believing the two were having an affair.

Pawlby was put under surveillance and Coulson tried to confront Clarke with the allegations. Prosecutor Edis said Coulson clearly knew about the surveillance operation and the question was whether he knew about hacking.

“He says not, we say ‘yes he does,'” Edis told the jury of nine women and three men.

The jury has been told that three senior journalists from the News of the World have already pleaded guilty to conspiracy to hack phones and that Glenn Mulcaire, a private detective who worked for the tabloid, has amitted carrying out the hacking.

On Thursday, the court heard the dramatic revelation that Brooks and Coulson had been having an affair for six years from 1998 at the time journalists on the News of the World were hacking phones.

The prosecution say their close relationship and the fact they were paying Mulcaire large sums when the paper was cutting costs indicated they knew hacking was taking place and was crucial for getting scoops.

Among those targeted were ministers in the former Labour government David Blunkett and Tessa Jowell, and Milly Dowler, a schoolgirl who went missing in 2002 and was later found murdered.

The disclosure that Dowler’s phone had been hacked while she was still missing caused widespread public disgust in the summer of 2011, prompting Murdoch to close down the 168-year-old paper.