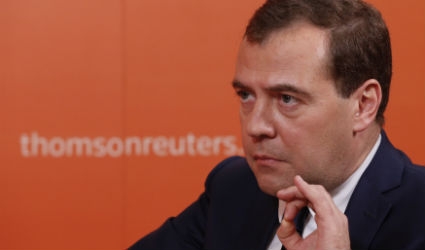 MOSCOW (Reuters) – Russia hopes an international peace conference on Syria will be held before the end of this year, Prime Minister Dmitry Medvedev said, despite reported differences with the United States over opposition representation.

He appealed to both sides in Syria’s civil war to compromise and criticised the opposition for demanding assurances of President Bashar al-Assad’s departure as a condition for the talks.

“I hope it will be possible to hold the conference by the end of this year but we understand that the influence of all sides taking part is limited,” Medvedev told Reuters in an interview late on Thursday.

“It depends to a great extent on the positions of the Syrian sides. We’re pushing them towards this, and I hope everyone who talks to different circles in Syria will do the same,” he said.

“It’s a difficult process and everyone must compromise, including opposition leaders and the Syrian government, of course.”

Russia has been Assad’s most powerful backer during the two-and-a-half-year-old conflict, delivering weapons, blocking three U.N. Security Council resolutions meant to pressure him and saying his exit cannot be a precondition for peace talks.

U.S., Russian and U.N. envoys are to meet in Geneva on Tuesday as part of preparations for the long-delayed conference, which Russia and the United States first proposed in May.

The latest target date for the talks, November 23, looks likely to be pushed back and sources close to the negotiations say a main point of contention is the role of the Western-backed opposition coalition.

Russia sees the coalition as just one part of the opposition and has suggested that several delegations, including Damascus-based figures tolerated by the government, could represent Assad’s enemies.

“I think that the ideas that are sometimes put forward – let’s exclude President Assad and then agree on everything – are unrealistic as long as Assad is in power,” Medvedev said.

“He’s not mad. He must receive some kind of guarantees or, in any case, some kind of proposals on the development of political dialogue in Syria itself, on possible elections, on his personal fate.”

Assad suggested last month that he could seek re-election in a vote scheduled for next year.

Medvedev said Assad might be worried by the fates suffered by Egyptian President Hosni Mubarak – who was overthrown and put on trial – and Libya’s Muammar Gaddafi, who met a grisly death after being ousted from power.

“You have to agree that when he recalls the fate of President Mubarak or Colonel Muammar Gaddafi … his mood probably doesn’t get any better,” Medvedev said. “So you can’t just say ‘get out and then we’ll agree everything’.”

Gaddafi’s ouster came after Medvedev, then president, ordered Russia not to block a U.N. Security Council vote that paved the way for NATO intervention. He and President Vladimir Putin have vowed not to let the same thing happen in Syria.

Medvedev expressed indignation that Russia had been forced to evacuate its embassy in Tripoli after it was attacked by an angry crowd in October.

“What kind of a state is it that cannot guarantee diplomats even basic security?” he said. “I said when I was still president that we could not allow events to develop in such a way in Syria.”