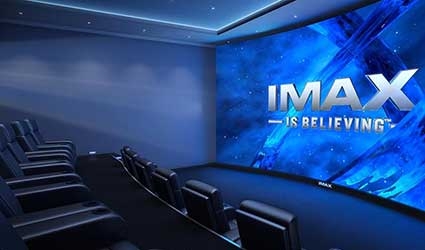 BEIJING (Reuters) – China’s newly minted rich can now get up close and personal to the movies after mega-screen maker IMAX Corp signed a deal to produce luxury home theatres in the company’s second largest market.

The fifty-fifty joint venture with Shenzhen-based TCL Multimedia Technology Holdings Ltd will give Chinese the chance to watch IMAX-enhanced Hollywood blockbusters in the comfort of their homes, maybe even on the day of their world premieres.

The price? At least $250,000 (£156,191.43). The joint venture is targeting wealthy homeowners in Hong Kong, Russia, and the Middle East, but the main focus, IMAX Chief Executive Richard Gelfond said, is China.

“China now is our second largest market in the world, and our fastest growing market,” Gelfond told Reuters on Friday. “We spend a lot of time concentrating on the Chinese market.”

IMAX earns 16 percent of its revenue in China, and now has 131 screens installed there.

Like other global brands, IMAX is betting on the appetite of ultra-rich Chinese for luxury goods and unique experiences, which is also helping the sales of retailers like LVMH and Tiffany & Co.

The number of Chinese millionaires rose by more than 14 percent last year to 643,000, the most recent wealth survey by Capgemini and RBC Wealth Management shows. The country is now home to the fourth largest number of high net-worth individuals in the world.

Neither IMAX nor TCL Multimedia Chief Financial Officer Edmond Chen would forecast how many home systems the company expects to sell when it kicks of production in 2015. The deal was signed this week.

TCL estimates annual growth for home theatre sets is likely to exceed 20 percent in the next five years. It said the market for home theatres may be about 2,000 sets now.

In July, IMAX announced an agreement with local conglomerate Dalian Wanda Group Corp to build up to 120 new theatres in China. The deal would raise the number of IMAX theatres to about 400, with Wanda running around half.

Gelfond in September helped Dalian Wanda launch a $8 billion production, entertainment and real estate project in the coastal city of Qingdao, surrounded by stars including Nicole Kidman and Leonardo DiCaprio.