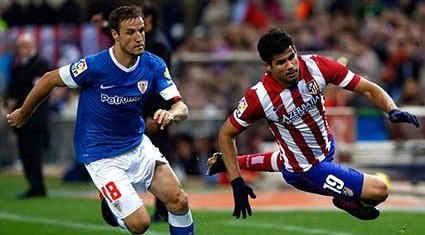 Atletico Madrid’s challenge to heavyweights Barcelona and Real Madrid showed no sign of flagging when goals from David Villa and Diego Costa secured a 2-0 home win over Athletic Bilbao in La Liga on Sunday.

The victory at a festive Calderon, Atletico’s 11th in 12 matches this season, trimmed the gap to unbeaten leaders Barca back to one point and restored their five-point advantage over city rivals Real in third.

Champions Barca, 1-0 winners at home to Espanyol in Friday’s Catalan derby, have 34 points, with Atletico on 33 and Real, who beat Rayo Vallecano 3-2 on Saturday, on 28.

Villa, who joined Atletico from Barca in the close season, opened the scoring in the 33rd minute with a well-taken volley and Costa raced on to a Koke through ball seven minutes later and finished clinically past Bilbao goalkeeper Gorka Iraizoz.

It was the Brazil-born forward’s 13th La Liga goal of the campaign, putting him level at the top of the scoring chart with Real’s Portugal international Cristiano Ronaldo.

Bilbao, who did not manage a single shot on target, played the final 10 minutes with 10 men after substitute Erik Moran picked up two bookings and they stayed fifth on 20 points.

Valencia were the last team apart from Barca or Real to win La Liga back in 2004. Only Villarreal have broken the stranglehold of the world’s richest clubs by income on the top two places since, coming second behind Real and ahead of third-placed Barca in 2008.

Atletico have less than a quarter of the annual budget of Real and Barca and a limited squad but have been transformed into genuine title contenders by Argentine coach Diego Simeone.

They are also flying in Europe and have won all three Champions League Group G matches ahead of Wednesday’s game at home to Austria Vienna.

Valencia, who are a shadow of the 2004 champions after years of financial struggles, ended a run of three successive defeats and eased the pressure on Serbian coach Miroslav Djukic when they won 1-0 at Getafe in an ugly encounter earlier on Sunday.

Dorlan Pabon struck the only goal in the 41st minute at the Coliseum and the game ended with brawling Valencia goalkeeper Vicente Guaita and Getafe defender Alexis Ruano having to be separated by officials and team mates.

The victory lifted the visitors to ninth with 16 points from 12 matches while Getafe stayed sixth on 19.

“We were in a tough situation but the team knew how to respond at a difficult stadium against a team that is playing very well,” Valencia midfielder Dani Parejo told Canal Plus television.

“I think we are coming away from here in much better shape. The coach told us to stay calm, ignore the pressure and just enjoy the game.”