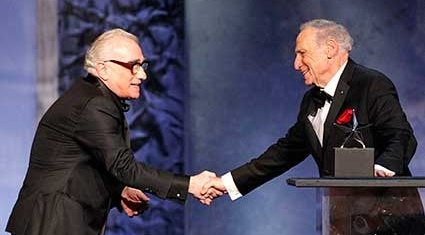 In a Saturday night event heavy with Hollywood actors and studio executives at the Los Angeles County Museum of Art, or LACMA, the Oscar-winning director Scorsese was praised for helping save the museum’s film program when it was nearly scrapped during the financial crisis, and for his work on film restoration.

Hockney, a multimedia artist who lived and painted for decades in Los Angeles, was recognized for the way he captured the city, from swimming pools to Mulholland Drive – images that came to define Southern California for many.

“I first arrived in Los Angeles, almost 50 years ago in January 1964, and they were just putting up this building,” said the 76-year-old Hockney, who moved back to England a few years ago. “It is getting bigger and bigger.”

LACMA is one of California’s most important museums and it has played a leading role in the burgeoning art scene in Los Angeles. The gala drew actors such as Warren Beatty, Tom Hanks and Jane Fonda, while British singer Sting was the night’s entertainment. It raised $4.1 million for LACMA’s film program.

LACMA has had a film program since its 1965 inception, but it fell on hard times a few years ago, prompting an outcry from Scorsese.

“Marty was very vocal when we announced that we were pausing our film program a few years ago during the economic meltdown, said LACMA chief executive Michael Govan.

“When he learned that we really wanted to rebuild and expand our program, he was the first person who offered to help,” Govan said.

Actor Leonardo DiCaprio, who has worked on five Scorsese films including the upcoming drama “The Wolf of Wall Street,” said that “spending time with Marty is like stepping into a world class film museum.”

“And when you work on a film with Martin Scorsese, you have the privilege of being part of that history.”

Scorsese, known for films like “Taxi Driver”, “Goodfellas” and “The Departed,” founded The Film Foundation in 1990 to work on film preservation and on Saturday he presented the restoration of four films by French filmmaker Agnes Varda.

The 70-year-old director appealed to the high-power crowd to help rescue film from the ravages of time.

“What is cinema?,” Scorsese told the audience. “For me there is only one answer. Cinema is necessary. Please don’t forget it.”