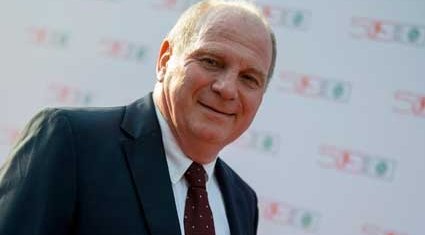 BERLIN (Reuters) – Bayern Munich President Uli Hoeness will stand trial for tax evasion in March, a German court said on Monday, but his club wants him to stay on in his current role.

The charges of the prosecutor’s office were admitted for trial which is set to start on March 10.

Hoeness, the face of Bayern Munich for many years, stunned Germany in April by saying he had voluntarily alerted tax authorities in January to a Swiss bank account he held, throwing the former West Germany international’s future into doubt.

He said it was a personal account, created for his stock market trading. He admitted to gambling bigger and bigger amounts and taking a major hit as the dotcom bubble burst.

Last season’s treble winners said on Monday the board’s position was that Hoeness should remain as chairman despite the trial hanging over his head.

“The board is of the unanimous opinion that Uli Hoeness shall remain in his position even with a trial being set,” the Bavarians said.

Bayern, who demanded a legal opinion on the current situation, said legal experts cited Hoeness’ long Bayern career, his contribution to the club over decades and the overwhelming backing of Bayern members as supporting the board’s decision on Monday.

“Also the law for board members does not foresee any ban on holding office due to a criminal conviction. Indeed there are a number of cases, including listed companies, where board members kept their posts despite accusations of breaking the law in other areas of their lives,” Bayern said.

A World Cup and European championship winner with Germany, Hoeness, who also won three European Cups as a player at Bayern, spent 30 years since as the team’s general manager before being elected president of the Bundesliga’s richest and most successful club.

“The court will examine the evidence and then will decide whether indeed the charge of tax evasion can be substantiated,” Munich chief prosecutor Ken Heidenreich told Reuters Television.

He said it was too early to talk about potential sentences in case he was found guilty.

“Only after the main trial is completed can a sentence be determined. Only after hearing the evidence can a prosecutor demand a specific sentence.”

Hoeness, who could face a jail sentence but hopes for leniency after naming himself as a tax evader, has said the account had nothing to do with Bayern.

German car maker Audi and sports equipment manufacturer Adidas, who both own stakes in the club, have not called for Hoeness’ resignation.