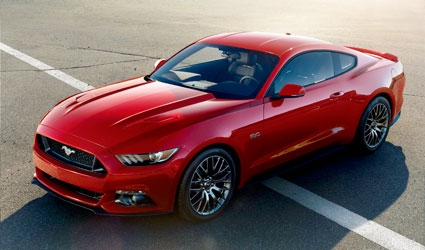 New Ford Mustang, for the first time in Europe.

Ford Motor Company today delivered the global debut of a motoring icon set to go on sale in Europe for the first time – the new Ford Mustang; and European debuts for two new vehicles offering a glimpse of the future for Ford vehicles large and small – the Edge Concept and the Ka Concept.

All three vehicles were introduced in front of a select audience of about 2,500 media, dealers and employees at Ford’s special “Go Further” event in Barcelona.

“Despite the challenging market conditions, Ford continues to heavily invest in new products in Europe to position the company for success in the future,” said Stephen Odell, Ford executive vice president, Europe, Middle East and Africa. “The introduction of Mustang and the Edge Concept and Ka Concept are proof of our commitment to building our line-up with exciting new vehicles.”

In addition to unveiling the new Mustang, Executive Chairman Bill Ford also presented the company’s Blueprint for Mobility and outlined Ford’s global and European market progress. He was joined by Barb Samardzich, chief operating officer, Ford of Europe, who delivered an insight into Ford’s plans to continue forging a path as a global technology leader.

The new Ford Mustang will be the first Mustang to go on sale in the Europe following almost 50 years of production in the U.S. Fastback and convertible models promise world-class levels of performance and refinement with sleek design that retains iconic Mustang design elements recognisable to car fans across Europe.

New Mustang will deliver power of choice in Europe, from 5.0-litre V8 engine to the all-new fuel-efficient 2.3-litre EcoBoost engine, and has been developed with performance, driving dynamics and usability in mind.

The Edge will join new Kuga and new EcoSport to offer a comprehensive line-up of redesigned Ford SUVs – a market segment that grew from 6.5 per cent to 11.9 per cent of vehicle sales between 2005 and 2012. Ford projects the segment will increase by 22 per cent in Europe between 2013 and 2018.

The new Ford Ka Concept, introduced at “Go Further” by Odell, reveals Ford’s vision for a practical choice for urban drivers, offering advanced technology only usually found in larger cars and a glimpse of a potential future generation Ford Ka for Europe.

Ford has sold more than 1.8 million Ford Ka cars since the vehicle was first launched in 1996 and projects that worldwide the small car segment will increase by 35 per cent by 2017.

The Ka Concept showcases clever design and remarkable fuel efficiency at an affordable price with technology including SYNC with Voice Control and AppLink, and MyFord Dock that stores, mounts and charges phones and satnavs.

“One year after Ford first outlined how cost, brand and product are the pillars for us to transform our business in Europe at the 2012 ‘Go Further’ event in Amsterdam, this event in Barcelona demonstrates how quickly we are acting on our promises with a continued aggressive product roll-out, technical innovation, and commitment to delivering sophisticated vehicles at affordable prices,” Odell said.