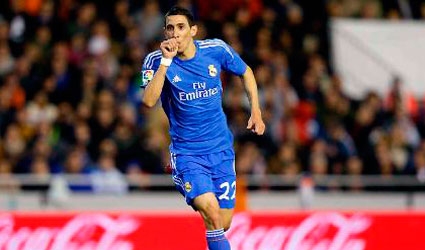 The goals from Di María, Ronaldo, who is now the club’s second highest away goal-scorer, and the deciding goal from Jesé sealed all three points against Valencia in the last match of 2013.

It is not easy to win in the Mestalla, one of the most difficult stadium’s to visit in La Liga, but Real Madrid did just that for the fifth consecutive season in the league. The Whites had to put themselves ahead on the scoreboard three times to make sure that they ended the year with a win.

The first two times were in the first half. Piatti’s goal levelled things after the wonderful piece of play from Di María to open the scoring, but the header from Cristiano Ronaldo, who is now the second highest away goal-scorer in the club’s history, gave his team the halftime lead. Mathieu’s headed goal made things tougher, but Jesé, on the pitch for nine minutes, secured the three points in the 82nd minute. A hard-fought win in the final match of 2013 which extends the Whites’ unbeaten run to twelve matches.

Real Madrid played their last match of 2013 in the Mestalla and did so against highly motivated opponents following the recent change of coach. Ancelotti’s team dominated from the start. The Whites monopolised possession in the first half hour and prevented their opponents from managing a single shot on goal.

Cristiano Ronaldo fired the first warning shot. Benzema recovered the ball and passed to the Portuguese, who shot towards the far corner in the 18th minute before Victor Ruiz’s acrobatics. The first goal of the match came ten minutes later. It was a wonder goal scored by Di María. The Argentinean controlled a cross-field ball from Marcelo, went through two opponents and beat Guaita with a powerful, well-placed shot.

Real Madrid had the lead but the joy did not last long. Just six minutes. Bernat crossed from the left and Piatti’s header levelled the match. The goal lifted the home side but the visitors’ response was immediate. Di María, who was his team’s best player in the first half came close to beating Guaita again. The Argentinean faked the cross before shooting in the 38th minute but the goalkeeper made a full-stretch save at the expense of a corner. The goal that gave Real Madrid the halftime lead came two minutes later. Di María was on hand to take the free-kick and Cristiano Ronaldo, who is the Whites’ second highest away goal-scorer in the league, put the ball into the back of the net with his head.

The script did not change in the second half and Real Madrid, who clearly dominated possession, had the first chance to score. The move, which deserved better because of the accuracy and quality of the first touch passing and shot, was started by Marcelo, who played the ball to Cristiano Ronaldo before he played in Benzema to finish. Despite the visitors’ dominance the match became more complicated from a corner. Parejo took the corner and Mathieu headed home in the 62nd to level the score. Real Madrid would have to react again and they spared no effort. Di María’s 66th-minute volley was easily saved by Guaita.

It was clear that Real Madrid were going to keep trying until the end, but they didn’t need until the 90th minute to secure the win. It came eight minutes before and was scored by Jesé, who had come on in the 73rd minute. Modric opened the play out wide the ex-academy player beat Guaita, who was expecting a cross, at his near post. A hard-fought win in the Mestalla to end 2013.