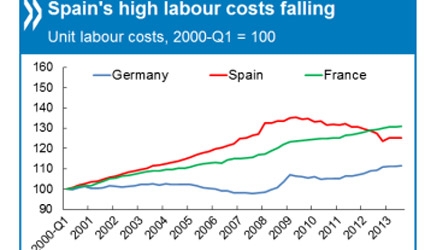 Spain has taken courageous steps to strengthen its labour market. Recent reforms have helped create jobs and should further boost competitiveness and employment in the years to come. But additional efforts are needed to boost competition in product markets and to improve assistance to job seekers, particularly young people, according to a new OECD report.

The OECD Review of the 2012 Labour Market Reform in Spain says that, despite the still difficult economic environment, more firms have been hiring workers on permanent contracts since the law was passed.

However, more needs to be done to reduce the unemployment rate that stood at 26.7% in October. Fighting unemployment proves particularly difficult because world economic growth and trade are below expectations. Job creation and ensuring that those without a job are not left behind should be the top priority of the Government in the coming months.

Presenting the report in Madrid, OECD Director of Employment, Labour and Social Affairs Stefano Scarpetta said: “Spain’s on the right track to gradually reduce unemployment. The reforms are already making an impact. But further efforts to better support job seekers and to provide firms with greater options to adjust in difficult times are still needed.”

The OECD credits Spain for improving the competitiveness of firms by facilitating firm-level adjustments in wages and working time in response to a shock. The OECD estimates that more than half of the 3.2% decline in labour costs in the business sector between the end of 2011 and the second quarter of 2013 is due to the labour reform package.

The reform has also encouraged firms to hire more workers on permanent contracts, by some 30% on average, although the effect on hiring on temporary contracts appears more limited. About 25,000 additional new permanent contracts are being created each month thanks to the reform, largely among firms with fewer than 100 employees, estimates the OECD.

But half of all unemployed people have also been out of work for 12 months or more, more than double the level before the crisis. Further action is therefore required to boost job creation, promote the reintegration of the unemployed back into jobs and make further progress in reducing the still widespread segmentation of the Spanish labour market.

Changes to collective bargaining agreements and dismissal regulations have helped give firms greater scope to use an internal adjustment strategy to respond to a shock — via wages and working hours — rather than dismissing part of their workforce. But Spain remains one of the OECD countries with the most generous severance pay requirements. The OECD suggests reducing over time the severance costs for large employers to align them closer with OECD and European averages.

There is also plenty of scope to improve the effectiveness of policies to promote the (re)integration of jobseekers into employment, including by strengthening the co-ordination between the central government and the regions.