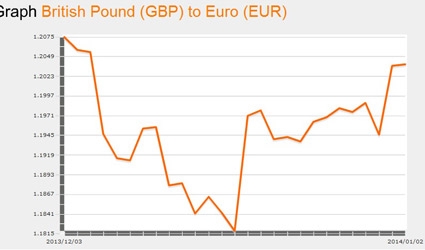 AFTER lagging behind the eurozone and USA economically since the financial crisis, the UK economy finally generated some momentum in the last two quarters of 2013.

Strong growth was driven by the return of the British consumer to the UK high street after a long period of household deleveraging. At least in the near term consumers are once again spending money aided in part by a very strong housing market, particularly in London. Britain’s manufacturing and service sectors also showed improvement driven by an easing of credit conditions and a lower pound earlier in the year. Continued low interest rates from the Bank of England and a commitment to keep them on hold until unemployment is below 7 per cent has aided an overall improvement in business and consumer outlook.

The Pound has mirrored the improving economic picture in the UK and is the best performing currency across the major pairs in the last six months. Against the Euro Sterling has risen 4 per cent and against the Dollar it is up 10 per cent since July. The bungled Cypriot bail out, with depositors taking a haircut on savings and the fiscal cliff saga and the government shut down in the US reinforced the upward trend in Sterling and investors moved out of Euros and Dollars.

Across the eurozone things continue to slowly improve. The European Central Bank (ECB) cut interest rates and is much more dovish in tone, following other central banks in announcing forward guidance of interest rates over the next few years. That is positive for the Euro in the longer term, however it is the current relative speeds of recovery that matter for currencies and the UK is simply growing at a faster rate than the eurozone as a whole. That trend is likely to continue at least for the first quarter of 2014.

Looking further ahead, both Ireland and Spain exiting formal bail-out programmes is a very positive step. Key to both countries’ progress has been breaking the negative feedback loop between a country’s overall solvency and that of its banking system. The ECB must be applauded in doing this with its OMT programme, even if it did it with a gun pressed to its head. Germany remains the key country within the Euro. German elections passed without major upheaval, with Angela Merkel remaining in power, so the ongoing internal adjustment programmes across the single currency area can continue, albeit at a very slow pace.

The key to how long the PIGS take to return to growth remains the willingness of Germany to also adjust, which looks as far away as ever. We can expect several more years of pain across southern Europe before growth returns. Quite what the long term scars of this policy will be in terms of long-term unemployment and lost growth potential is unclear at this stage, but it is unlikely to be positive.

2014 is set to be the year that the highly accommodative monetary policy in place across the western world starts to be wound down. Interest rates are likely to rise, only gradually at first but expectations of higher rates tend to be reflected quickly in prices. How consumers and business cope with higher rates will be a major theme in 2014 and will be a major driver of the value of the Pound, Euro and Dollar over the coming months.