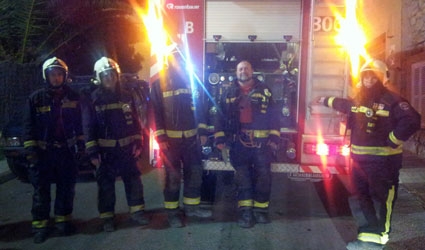 BOMBEROS: Local firefighters save the day

IT’S quite the coldest, darkest, trickiest part of the year now isn’t it? Everyone wants to hunker down and hide indoors.

We got a load of new wood in last weekend with some serious hunkering down in mind. My husband gets quite Neanderthal (“Man Make fire”), he does like to stoke up the wood burner as if it is the Flying Scotsman.  So we were pretty toasty and comfy on Saturday evening, right up to the moment I realised the roof was on fire.

Downstairs we didn’t realise that there was a problem. But upstairs there was a weird smell.  It turned out that this was the smell of the ceiling burning. At first I just thought that the new wood had a peculiar smell. The chimney goes through the room where our office is, that’s the room with the PCs and the cameras, in fact all the things which we use for our jobs.

When I discovered that the roof of our office was aflame I didn’t exactly panic. It was confusing. How could it be possible that the ceiling be burning? My husband and I swung into action with buckets of water.  At  this point  I realised I hadn’t ever rung the emergency number : I had to Google “Spain Emergency Number” (it’s 112 by the way). I got as far as “I have a fire in my house” in Spanish before I started freaking out and losing the ability to understand or speak any language except gibberish. Meanwhile my husband switched to “Man Put Out Fire” and got on with it.

The Bomberos joined us from Santa Ponca, and we were also visited by our Local Police and then the Guardia. Together we figured out  that the sap from the newly cut wood had condensed at the top of the chimney and ignited residual soot.

The police and the firemen impressed me with calm, friendly, and thorough attitude.  I ended up chatting with one of them and discovered that he really liked cats. Absurdly we talked about our cats that were all lined up on the stairs in a “What’s going on?” formation, whilst his colleagues went up on the cherry picker  to check the fire was out completely.

It was nothing like the horrendous destructive fire that ravaged through our valley last year, but these were some of the guys who had been fighting it. I’ve got to say that I thought they were fantastic.

So: the fire was put out, and no one was hurt, but it certainly spooked us. What if I hadn’t smelt the strange odour? What if we’d nodded off downstairs, what if, what if? The next night we sat in living room in our jumpers, coats, hats, scarves and gloves, the cats were pretty miffed there wasn’t a fire to arrange themselves in front of. They’ve submitted their complaint in triplicate. www.familymattersmallorca.com