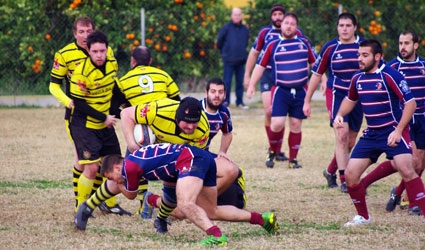 IT was another double header for Orihuela RFC as the cadets and B team played against Cartagena last weekend.

The ITV Orihuela RFC cadets were up first against Cartagena looking at keeping their 100 per cent league success in tact, which they did in style again.

With their coach Pedro doing some excellent work moulding the team together and with link up work by the forwards and backs it kept the scoreboard ticking along. Camillo got the score going with a well worked try, before Jose added another one, scoring four tries in total on the day.

The scores kept coming as a result of some excellent passing out of the tackle to keep the game flowing and before half time Orihuela RFC added four more tries with Gregory getting one of them himself and the conversions going in at half time 38-0 up.

The second half was much of the same, but credit must go to the Cartagena players as they never gave up and kept breaking out of defence to get a score of their own, but the Orihuela RFC defence stood firm to run out 60-0 winners with other tries coming from David, Javier and Adrian and Gregory getting six conversions and a penalty.

Next up were the B team against Cartagena B, looking at keeping their push for the top going against a very strong Cartagena team.

The home side started off very strong with both teams putting in some fierce tackles and defences holding firm. Orihuela RFC broke the dead lock with Alex getting a difficult conversion.

With both teams trying to get the upper hand in a very tight game, the Orihuela RFC defence held firm, it was Alvaro again who gave some daylight between the two teams to race away from the visitors’ defence to extend the lead to put the home side 14-0 up. Cartagena are not a team to sit back and pushed the home defence hard and did very well to keep them out, but in the end the pressure told and got a try of their own, which they deserved.

The next game is on Sunday with ITV Orihuela RFC first team away to Albacete, followed by the B team next Saturday at home to Yecla.