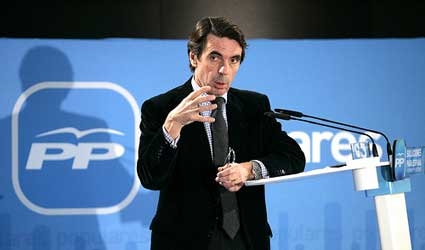 AS predicted when the corruption case involving the King’s son-in-law Iñaki Urdangarin made headlines, Spain’s monarchy will slim down.

The Prince of Wales, saw this as mini-salvation for hereditary privilege some time back and his cousin the Spanish king is following suit.

The two Infantas, Elena and Urdangarin’s wife Cristina, are to be sidelined while Queen Sofia and Prince Felipe’s wife Letizia will be “professionalised.” They will receive respective salaries of €63,234 and €49,182 plus €68,505 and €53,382 expenses in Spain’s version of Charles’s “Firm.”  Formerly they received only undisclosed sums for expenses.

In a crisis-burdened society that was once Juan Carlista but never monarchist, this will bring complains.  Others will argue that the two women can hardly do less than the majority of politicians but are infinitely better to look at.

THE Gurtel corruption case begat Barcenas and now the PP party’s ex-treasurer Barcenas is in prison and singing like a canary.

Corruption has always been endemic in pre- and post-democracy Spain.  Franco, held not to be personally corrupt, let those around him wallow in sleaze as perks of the job.

Felipe Gonzalez, the first PSOE president, did likewise.  Cases like Filesa and Flick come to mind, plus millions of public money filched by Luis Roldan, director general of the Guardia Civil between 1986 and 1993.

All of which goes to show that if there’s a bob or two to be made, some Spanish politicians are as likely to make it as denounce it.

Interestingly, Francisco Correa – the man whose surname translates as Gurtel in German – was gradually inched out once Mariano Rajoy took over from Jose Maria Aznar at the head of the PP.  Correa nevertheless maintained his contacts and his power to corrupt in the Valencian Community.

Go figure, as an American would say.

ARTUR MAS has set his compass and Cataluña’s for a faraway land called “Independence.”

He could be heading for shipwreck but so far is determined not alter course.  Or, possibly, is unable to.

Pro and contra arguments abound, including one from Andalucia’s regional president Susana Diaz who pointed out that many Catalans, their parents or grandparents are Andalucia-born.  Following putative secession, they would be foreigners she said.

She’s right. Catalans going back to see los yayos in the holidays would have to produce passports on entering Andalucia as the Schengen agreement would be void on leaving Spain and the EU.  And no-one would understand the language they spoke, either.

There are those who feel the former president did his former protégé a favour by not turning up. Aznar’s disapproval will have done Rajoy a power of good with the voters he needs most, the undecided Centre.