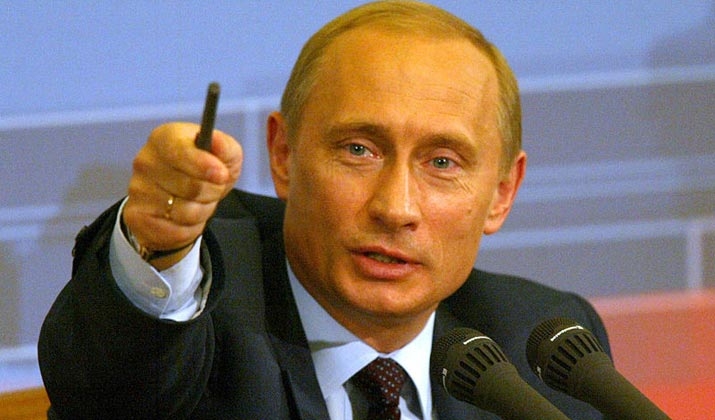 President Putin answered questions about why he deployed troops to “stabilize” eastern Ukraine for Russian speakers, how the West was clearly at fault for the change in government in Kiev, and whether former Ukrainian president Viktor Yanukovych could stage a comeback. Some of his statements raised the question of how Mr. Putin’s mind actually works.

Putin’s government has blamed events in Kiev on anyone except the Yanukovych government, called the new interim government “fascist thugs” and argued that they threaten Russians in Crimea and elsewhere in Ukraine.

Putin said, “The current Acting President is definitely not legitimate. There is only one legitimate President, from a legal standpoint.” He added that he will not recognize the presidential elections currently scheduled for May 25 in Ukraine — unless, of course, the current “atmosphere of terror” has been resolved.

Russian forces are not stationed in Crimea.

Those armed gunmen who have been photographed by hundreds of journalists patrolling the Crimea and demanding that Ukrainian forces stand down and turn over their weapons are, according to Putin, extremely well-armed self-defence units. “So far, there is no need for it, but the possibility remains,” Putin said of deploying actual Russian forces into Ukraine. “What can serve as a reason to use the Armed Forces? Such a measure would certainly be the very last resort.”

Putin added that not a single shot has been fired between Russian forces stationed in Crimea and Ukrainian soldiers — even though video has emerged of Russian soldiers firing “warning shots” at their Ukrainian counterparts. According to Putin “the tension in Crimea that was linked to the possibility of using our Armed Forces simply died down and there was no need to use them.”

Russia stands at the ready if need be, he continued, to protect the peoples of eastern Ukraine, a large number of whom are native Russian speakers.

The U.S. is to blame for Russia’s economic instability.

The Russian president insisted that the slump in Russia’s stock market on Monday was the result of the United States’ economic choices, not concern over his decisions related to Crimea. “Money likes quiet, stability and calm,” Putin said. “However, I think this is a tactical, temporary development and a temporary influence.” Following Putin’s press conference, the Russian ruble strengthened at the cost of spending $12 billion in reserves to shore up the currency.

The former KGB operative also took the opportunity to criticise the United States and other NATO countries for double standards in their condemnation of Russian actions. “Our approach is different,” Putin said. “We proceed from the conviction that we always act legitimately. I have personally always been an advocate of acting in compliance with international law.” The Russian president singled out the recent NATO intervention in Libya as an example.

Putin also dismissed the possibility of sanctions from the U.S. and its allies, noting the possibility that such embargoes would hurt the countries that impose them. “I believe that in the modern world, when everything is so interconnected and everyone depends on everyone else, you can cause pain to each other, but this will be mutual damage and we need to consider that,” he said.