Sssurprise! Woman wakes to 4ft Snake in her bed 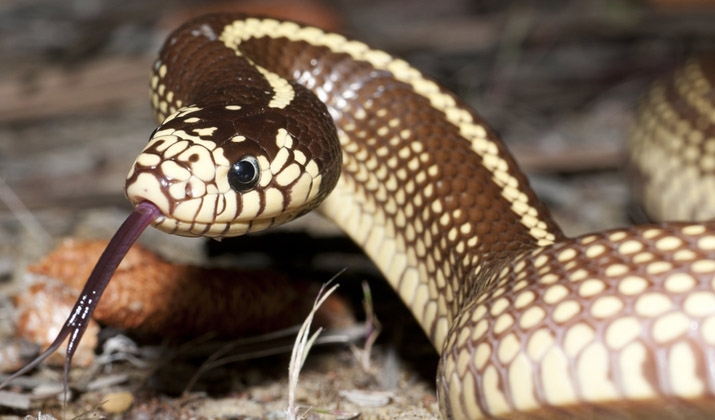 A California Kingsnake like Hiss, who had been missing for six months

A mother of four from Guardbridge, Fife woke up to find a 4ft snake sharing her bed.

At first she thought her four children were playing a trick on her. But seeing the reptile move she realised it was no joke.

When she threw back the covers and screamed it sank its fangs into her chest. The first thought that went through her mind was that the snake might be poisonous and deadly.

Mrs Griffin called Scottish SPCA for assistance and also told her neighbours about what happened. News quickly spread along the street and a short time later the snake’s owner Gareth Niven, 21, arrived at her front door to collect it.

After calling Scottish SPCA to say Mr Niven had come forward, a driver for the animal charity turned his vehicle around and the job was cancelled.

The snake bite didn´t have any serious effects, only leaving minor bruising and puncture marks. Despite there being no risk to Ms Griffin as a result of the bite, kingsnakes are constrictors and the reptile could have injured or even killed her had it wrapped itself around her neck.

Mr Niven said that the pet often gets loose and that he was probably living in a derelict house separating his from the Griffin home. Council workers who recently visited the abandoned house may have disturbed Hiss and caused him to move into Ms Griffin’s home.

Although Hiss seemed more aggressive than usual, this was probably as a result of hunger and the fact he had to fend for himself for the last six months, Mr Niven said.

Worryingly it’s not the first time Hiss has escaped from his tank. During a previous excursion Hiss was on the loose in the area for a lengthy two years.

Mr Niven admitted the reptile is nicknamed ‘Houdini’, such is his ability to break out of captivity.