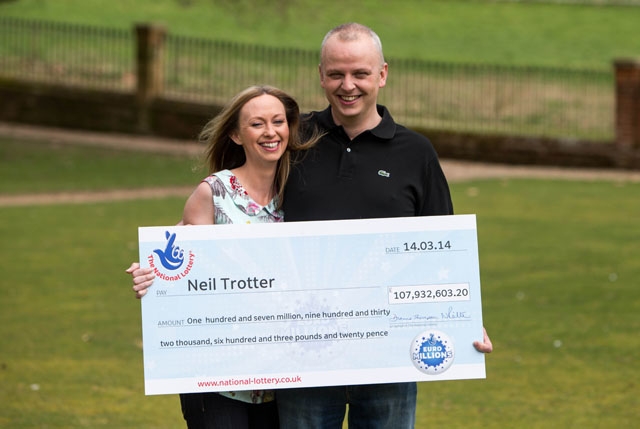 The winner of the £107.9m EuroMillions jackpot has today been revealed as mechanic Neil Trotter, 41, from Coulsdon, Surrey.

Mr Trotter revealed himself at a news conference with Nicky Ottaway, his partner of eight years, and said he had decided to go public about the win because he didn’t want to keep the news a secret from his friends.

Mr Trotter felt lucky, even telling staff at his father’s office on Friday lunchtime that “this time tomorrow” he would be a multi-millionaire.

And thanks to a Lucky Dip ticket Mr Trotter got his wish.

Mr Trotter learnt of his good fortune around 10.30pm on Friday night.

He said: “I’ve always thought I’d win big and I’d had a good feeling all week.

“On Friday evening we were sitting at home when I checked the time and thought the draw must have taken place by now. I took out my ticket to check the winning numbers and amazingly one by one they matched.

“I told Nicky, my partner, ‘I’ve done it, I’ve won the lottery’. But she told me to shut up and to stop being an idiot.

“Apparently I turned white as a sheet and couldn’t sit still,

“I kept walking round the house – I didn’t know what to do with myself.

“I got her to check the numbers with me and she started screaming!

“Next we called my Dad but he said I was being an idiot too and that I should stop drinking, but I hadn’t had a drop.

“Even when we jumped in the car and drove round, it took him a while to realise we were serious.  My Dad’s not often lost for words but he was on Friday night.”

Mr Trotter runs his own repair garage in Mitcham called Chameleon Coachworks, but has said he plans on giving up work.

“I worked my last shift on Friday repairing and spraying other people’s cars.

“I have a few phone calls to make to let people down but this is my time now.”