Almeria Cabo de Gata hotel may be given green light 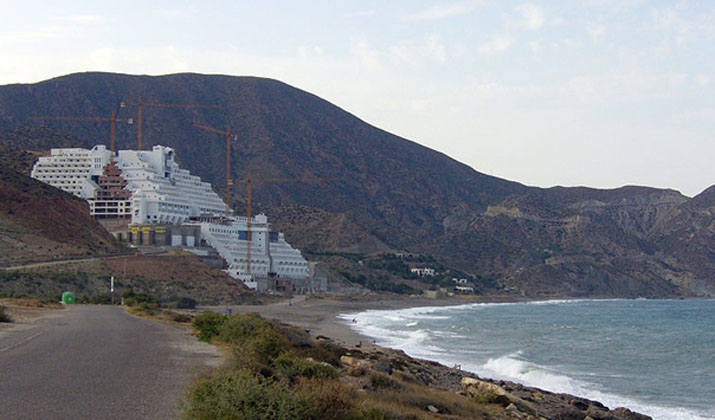 Environmentalists feel the hotel should be demolished. Photo: Untipografico.

After nearly a decade of legal wrangling, the half-built 21-storey Algarrobico Hotel in Almeria’s Cabo de Gata nature reserve may be given the go-ahead.

The hotel, on one of the most unspoilt Mediterranean beaches, could now be granted permission to be completed following the latest court ruling in an ongoing legal saga that began in 2005.

Andalusia’s Supreme Court has ruled that the Algarrobico Hotel, built on the coast, was constructed using a legal permit.

This decision overturns multiple previous rulings that deemed the build illegal and ordered its demolition.

The unfinished hotel has come to be a symbol of the vast overdevelopment of the Spanish coast during the boom years.

The structure, made of glass and concrete, consists of 411 rooms. The original plan was that the hotel would form part of a larger complex, complete with 1,500 holiday flats and a golf course.

Since 2006, when a court ordered the developers to cease construction, building work has remained at a standstill and the structure has proved an eyesore.

Campaigners, including Greenpeace activists, have led the calls for the hotel to be pulled down on environmental grounds.

They painted the words “Hotel Illegal” on its façade and at various times occupied the empty building.

A Greenpeace spokesperson said: “This monstrosity is the symbol of the destruction of our coasts.

“It is a clear example of the free-for-all that has destroyed our coastline, where norms of environmental protection were torn up in favour of big speculative interests.”

The organization has vowed to continue to fight for the hotel’s demolition, arguing that the building project flouted the 1994 Natural Resources Plan by being built within the boundaries of a protected nature reserve.

Spain’s government ruled in 2005 that the hotel had indeed contravened the Coastal Law, a law which forbids construction within 330ft of the sea.

The government ordered its expropriation and demolition – but the decision was quashed two years later.

Subsequent court rulings in 2008 and 2009 supported this initial order.

The decisions were challenged by the regional government and now it seems that Andalusia’s Supreme Court agrees.

Many of the local authorities have lobbied for the hotel’s completion in the hope of boosting tourism and easing unemployment figures in the area.

The mayor of Carboneras, Salvador Hernandez, welcomes the latest ruling. “After eight years of soap opera, now is the time to sit down and decide once and for all a solution to this problem.

“The council continues to believe that the best option for this hotel after such a huge investment is that it is completed and opened to provide wealth and jobs for the town.”