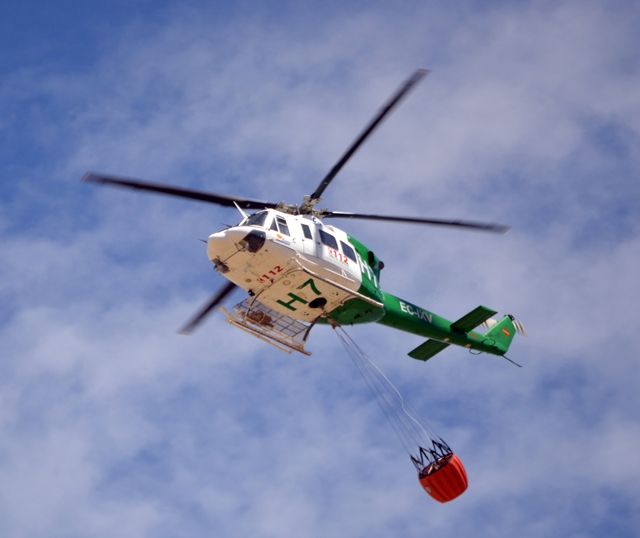 Almeria fire services battled to put out the blazes.

More than 300 people were needed to fight two large scrubland fires that swept across parts of Almeria.

Together with nine helicopters and planes and 11 fire engines they battled for hours to bring the blazes, fanned by high winds, under control.

At Somontin the fire services were alerted in the early hours of Sunday morning to flames taking hold of forest and brushland.

Despite being on the scene quickly, work was difficult, due to uneven terrain hampering vehicle access to the affected area.

By late morning, INFOCA (official body for the prevention and suppression of forest fires in Andalucia) advised that the fire seemed to be slowing, due to a favourable wind.

Nobody was hurt, although a couple in a caravan had to be evacuated. INFOCA declared the fire as being stabilised at 3.56pm on the Sunday, and controlled just before noon on Monday.

Unfortunately, just as the Somontin fire was stabilised, a second fire broke out – this time close to Lucainena del Torres and Sorbas.

The area is predominantly scrubland, and the wind did not help in this situation, as the blaze quickly took hold. Within a couple of hours, the flames and smoke could be seen from many miles away, including in Vera, Turre and Mojacar.

Mojacar residents spoke of ash landing on their properties, whilst Turre residents could smell the burning. The red glow of flames against the clouds at dusk could be seen as far as the hills beyond Albox.

A number of people left their homes on the outskirts of Sorbas and moved further afield, whilst the crews battled the flames.

Overnight on Facebook, the members of the ‘Local fire and weather watch” group for Almeria and Murcia organised places for people to stay if needed.

The fire at Lucainena del Torres eased somewhat on Monday morning, and INFOCA announced that it had been stabilised just after noon on Monday afternoon.

At time of writing, INFOCA was yet to determine the cause of the fires, although local residents have suggested lightning strikes may be responsible.