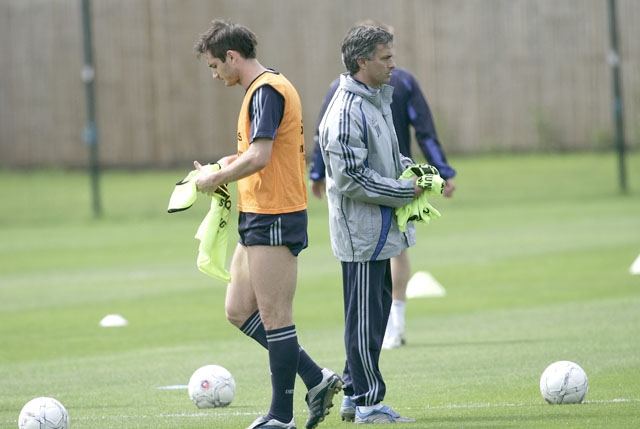 Lampard and Mourinho have been named in the alibis.

Chelsea manager Jose Mourinho and player Frank Lampard have been drawn into a mafia murder trial.

The trio, members of the Amato-Pagano crime family, are arguing that they could not have been involved in the murder of rival Carmine Amoruso, 44, because they were at a football match.

Amoruso was gunned down in a video arcade in the war between rival factions eight years ago. The mafia war was over control of the lucrative drug trafficking market in Naples.

The photographs show all three of the accused posing with Mourinho and Lampard while Chelsea were staying at Barcelona’s luxury 5 star Hotel Arts where rooms cost upwards of £1,000 a night .

The Chelsea team were in Spain for a Champions League clash with FC Barcelona that ended with a 1-1 draw.

After an informant named the three men as responsible for the murder they were charged and convicted of the crime, being sentenced to life. However, all three are currently appealing.

The defence team for the men at the hearing in Naples have produced proof of the Barcelona trip, including plane tickets and hotel bills to back up the alibis. Hotel staff are also expected to testify.

Luigi Senese, the lawyer defending Cesare Pagano, said:”These photographs are crucial to the case because they indicate that my client and the other two men could not have been at the scene of the murder.

“You can clearly see Pagano in the pictures with the Chelsea manager Jose Mourinho as well as several team members. How can he and the others have been at the murder and at the game at the same time?

“These super grasses are lying. The three men were in Barcelona for a Champions League match and besides the photographs we have hotel receipts and airline tickets.

“The three men were in Barcelona to watch the match as they are all keen football fans and fortunately for them they bumped into Mourinho and took a photograph with him to prove they were there.”

Reportedly, the three flew business class to Barcelona on false identity documents, spending more than £15,000 during their three night stay in Barcelona.

Italian authorities say that the three defendants have made millions from importing cocaine and supplying the city of Naples and beyond.

The drug money was said to have funded their luxury lifestyle of lavish villas, top of the range cars and expensive travel excursions.