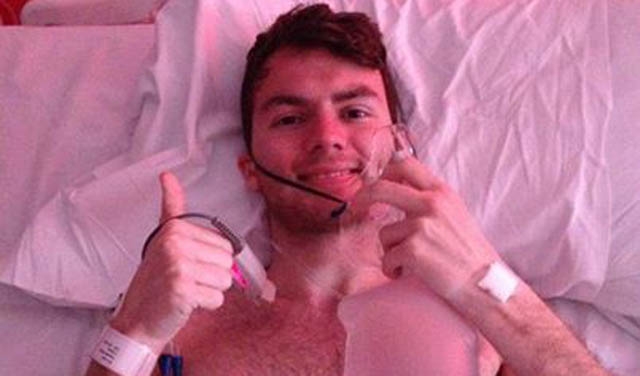 A terminally ill UK teenager who has raised over £3m for charity has denied “duping” people after being released from hospital on Friday following a dramatic improvement in his condition.

Stephen Sutton, 19, who was diagnosed with incurable colorectal cancer aged 15, was recently discharged from hospital.

The improvement in his health comes after a dramatic two weeks in which he was reportedly close to death, met Prime Minister David Cameron and greatly improved following ‘coughing up’ a tumour.

The events led some to question the veracity of his story, but Stephen has responded by insisting that he still has incurable cancer.

The Birmingham Mail reported that one person wrote on its Facebook page: “Am I the only one who thinks something is not quite right here? While I hope I am wrong it feels like we are being conned.

“One minute he tweets saying he is dying and won’t see the next day, then all of a sudden he is being released to go home.

“As I said, I hope I am wrong but I have a strange feeling about this.”

Replying to one Twitter user the teen, from Burntwood, Staffordshire, wrote: “Sorry to disappoint you! So you know, I still have my cancer and it’s still incurable, if that makes you feel less ‘duped’ x.”

After being told he could leave Birmingham’s Queen Elizabeth Hospital the teen wrote on his Facebook page:

“After being at a point where it seemed like I’d never make it out it feels so awesome to be able to put that. The recovery I’ve undergone recently is quite remarkable.

“This extra period I now have feels like a gift, one that I’m determined to use productively. I’ll probably be straight back to doing some crazy stuff/events/etc soon, but for now, it just feels great to be home!”

The teen had a bucket list of 46 things to do before he died, with one of these goals being to raise money for Teenage Cancer Trust.

The teen’s positive outlook has won him fans all over the world, including celebrities like footballer Steven Gerrard and comedian Jason Manford.

On Sunday Stephen ticked another item off his bucket list when he set a Guinness World Record for the most people making a heart-shaped hand gesture – more than 500 people.