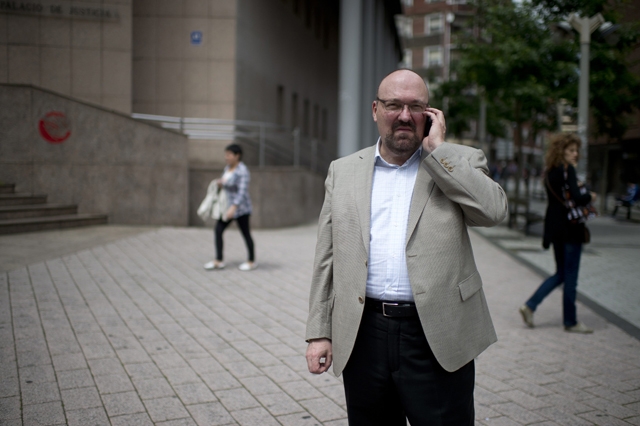 Mario Costeja Gonzalez, following the ruling in his favour.

The European Court of Justice (ECJ) has granted internet users the right to force Google to hide embarrassing details about their past in search engine results.

The case was brought by a Spanish man after he complained that search results infringed on his privacy.

The case was referred to the EU by Spain’s court of appeal, the Audencia Nacional.

Mario Costeja Gonzalez wanted an auction notice of his repossessed home to be removed from search engine listings, arguing that the listings infringed his privacy.

The court found in favour of Spanish citizen Mr Gonzalez, who demanded that Google block links to newspaper reports dating back to 1998 about his social security debts.

Mr Gonzalez argued that the proceedings concerning him had been ‘fully resolved for a number of years’.

Internet giant Google must now remove the results, ‘unless there are reasons not to’.

Following the landmark ruling anyone will be able to ask the tech company, along with other search engines, to block references to humiliating or sensitive information about their life.

Even though content cannot be removed from the internet altogether, the court’s decision means that the information in question can be hidden from search results if it is ‘inadequate, irrelevant or no longer relevant, or excessive’.

Google had argued that it does not control personal data; it just offers links to data that is already freely and legally available. The company said that it should not be forced to play the role of censor.

The case decision comes under the European Data Protection Regulation, Article 17, which includes the ‘right to be forgotten and to erasure’.

The EU ruling, which found in favour of citizens having the right to control private data, means that anyone can request that Google, or any other ‘data controller’, follows the Brussels doctrine of the ‘right to be forgotten’.

This right says that people should not be damaged by discussion of past mistakes or misjudgements.

Data controllers, defined as ‘people or bodies that collect and manage personal data’, will be legally obliged to comply unless there are specific reasons, such as the data being in the public interest.

Failure to remove this information can lead to a hefty fine.

Some have argued that the ruling is an attack on free speech and will allow internet users the ability to whitewash their personal history from the public domain.

The EU’s far-reaching power (Google is an American company) has also come under fire since the ruling.

In response to the court decision Google said: “This is a disappointing ruling for search engines and online publishers in general. We now need to take time to analyse the implications.”

Just last year it looked like Google would not be forced to remove undesirable personal information from search results.

However, the decision by the board of 13 judges ruling that information could be suppressed even if it was ‘true, accurate and lawfully published’, has meant a total u-turn.