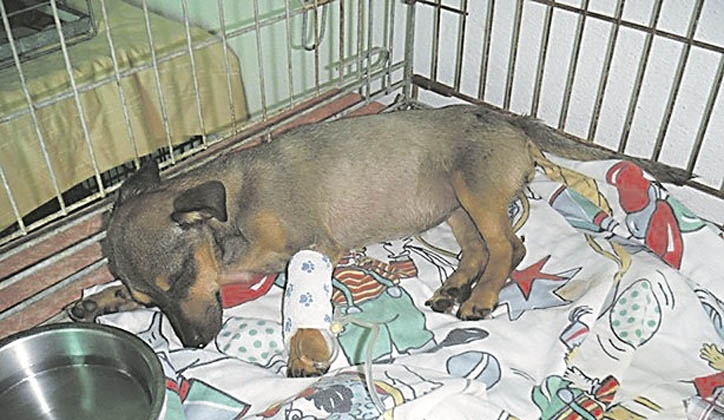 MOJACAR-based animal charity PAWS is pleading with people to stop dumping animals on its doorstep and has gone into emergency lockdown.

In June an additional 43 dogs were abandoned at, or near to, the shelter: six adults and 37 puppies. Some were too young to be separated from their mothers.

The cattery has also suffered a similar amount of abandoned cats, leaving it in dire straits in trying to house double its designed capacity.

As if the sudden influx of additional animals was not problematic enough, there has also been an outbreak of the parvo virus. Parvo is a potentially fatal disease, and is extremely contagious. The virus can lay dormant in dogs for several days before any symptoms are apparent. Once present within a group of dogs, it is extremely difficult to contain without the isolation and quarantine of incoming dogs.

As a result, the shelter has had to go into emergency lockdown with no outside visitors allowed inside. No rehoming or dog walking is allowed until matters can be brought under control.

“We have had to establish an emergency quarantine in what is normally the vet’s treatment room,” said shelter manager Yvonne Tromp.  “But there isn’t room for all of them. We still have dogs in cages outside, with improvised awnings to protect them from the direct sun. Even the old transport van has had to be pressed into service as a housing area.”

PAWS is a charity run by volunteers, surviving solely on donations from the public, and is not equipped as a veterinarian facility. It now has to deal with the current ‘boarders’ and ensure the parvo virus is completely wiped out before normal services can resume. This has placed a huge additional strain on volunteers and the limited resources. Some have been working full shifts every single day for more than three weeks with no break at all.

And without the help of visiting volunteers staying in caravans on site, the vast majority of the puppies would simply have had to be put down.

Yvonne Tromp expressed her frustration, saying: “This is preventing us from the doing the work for which we were set up in the first place, protecting stray animals and finding them permanent homes where they will be properly cared for.

“Having dogs neutered would avoid all these unwanted puppies being dumped on PAWS. People may think they are leaving them somewhere safe; in fact, they are just putting them at greater risk.”

Because of their age, puppies need feeding and hydrating at least four times a day, and their cages need to be cleaned frequently.  PAWS are very short of volunteers, and have expressed their ongoing need for extra pairs of hands. This is all contributing to the risk of needing to have dogs and puppies put down.

“That is a dreadful decision for anyone to have to take, whose entire ethos is to protect and save animals,” said PAWS President Karen Polansky.

“Every animal shelter has had to deal with parvo at some time because it is widespread in Andalucia. PAWS has contained and treated a previous outbreak successfully, and been fully cleared to operate normally again. It wasn’t on this scale. We are determined to do so again despite the strain. But we can only do that if people stop dumping dogs on us.”

Karen concluded: “We would ask for the public’s understanding as to why the shelter must remain closed until further notice. And PAWS would like to emphasise that when the crisis is over, dog adoptions will resume as usual. We have a long list of healthy dogs eager to find permanent homes.”