Gangsters blamed for “act of war” 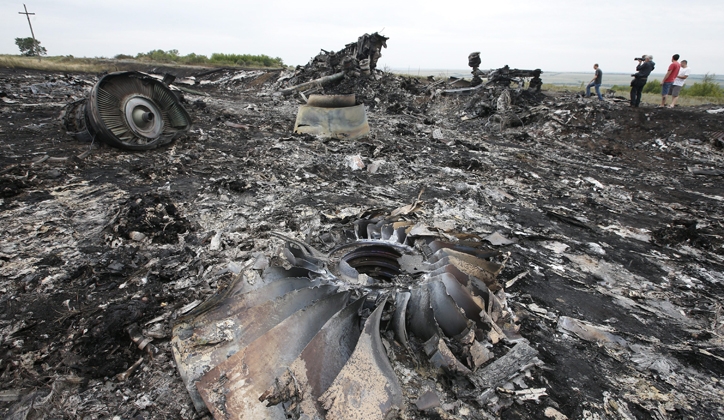 UPDATED: As evidence is mounting that what brought down flight MH17 was a missile supplied by Moscow family members and friends of the passengers who went down with the flight are saying that “Russian gangsters” have ended the lives of their loved ones in an “act of war”.

Grieving relatives are demanding that the aviation authorities explain why the Boeing 777 was permitted to fly through a war zone in which at least three military craft had already been shot down.

Some relatives of the victims are questioning if the action was not prompted by Putin over the matter of the gas supply. Simon Mayne, from Leicester whose 21-year-old son, Richard, was among the tragic victims, commented to the Telegraph that “They got those rocket launchers from Putin. It’s all about bloody gas. No one cares about the innocent lives lost because some gangsters are squabbling over gas in the Ukraine.”

Other family members are demanding that someone be held responsible for the incident and that it not just pass as a tragic accident.

The question being repeatedly posed by the loved ones left behind is the one of the flight path – many are wondering why a  commercial airliner was not diverted to safer air space rather than having a route which took them directly through what is effectively a war zone.

The Malaysian government has qualified the disaster as “an outrage against human decency” and Valeria Lutkovska, Ukraine’s commissioner for human rights commented that the aircraft had been shot down by “non-humans.”

The Malaysian airliner carrying 298 people, all of which have died, crashed in Ukraine near the border with Russia. Flight MH17 was en route to Kuala Lumpur from Amsterdam.

At least ten of the passengers on board the Malaysian airliner were British. The other confirmed passenger nationalities are 189 from the Netherlands, 44 from Malaysia (which is including the 15 flight crew), 27 from Australia, 12 from Indonesia, 4 from Germany, 4 from Belgium, 3 from the Philippines, 1 from Canada, 1 from New Zealand and 4 that are unverified.

Over 100 Aids experts and activists were in the plane on their way to Melbourne. Many of them were the greatest minds in the fight against HIV and Aids, including world famous HIV researcher Joep Lange.

In recent weeks a number of military planes have been shot down by pro-Russian separatist rebels.

On Thursday the Ukrainian officials stated that one of their fighter jets was shot down by a missile from a Russian plane and additionally, that Ukrainian troops came under fire from missiles, launched from a village on Russian soil.

These alleged events represent what Ukraine declares is growing evidence that Moscow is directly aiding separatist insurgents within eastern Ukraine who now have a considerable supply of powerful weapons. However, rebels have denied that they were behind the attack.

Despite this statement, Sky News claim that Igor Strelkov, the leader of the pro-Russian Donetsk People’s Republic, appeared to have bragged about the incident on social media following the incident.

In a quickly deleted message recovered by Sky News, he allegedly stated “We warned you not to fly over our sky.”

Additionally, Ukrainian security services state that they have intercepted phone conversations in which pro-Russian separatists appear to confess to taking down Flight MH17, screaming, ‘They shouldn’t be f*****g flying. There is a war going on.’

The airline lost contact with the plane over Ukrainian airspace. The plane didn’t make it into Russian airspace.  Media reports state that the plane came down between Krasni Luch in Luhansk region and Shakhtarsk in the bordering region of Donetsk.

An aviation expert told Sky News, “It’s highly likely this aircraft was flying along a fault line between Russian and Ukrainian defences.

“It’s possible the Ukrainians flapped a bit, thought it was hostile and shot it down.

“Perhaps it was confusion at the Ukrainian air defence centre.

“It looks like someone failed to recognise this was a civilian plane and shot it down.”

British Airways stated that customer safety and security was its top priority.

A spokesperson explained, “Our flights are not using Ukrainian airspace, with the exception of our once a day service between Heathrow and Kiev.

“We are keeping those services under review, but Kiev is several hundred kilometres from the incident site.”