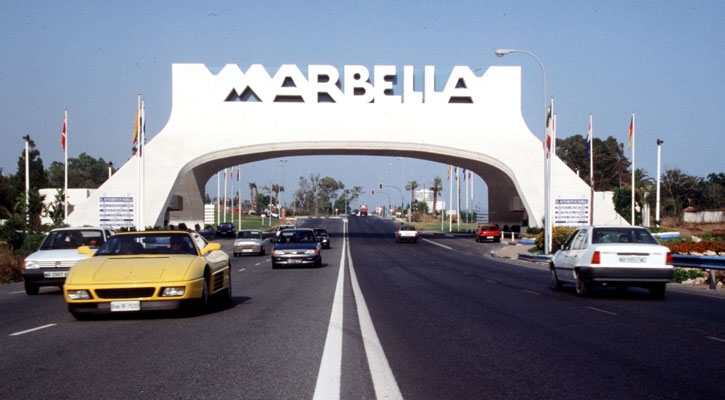 FIVE Marbella people who have set up a private transport company have had their van burned out after becoming embroiled in a ‘taxi war.’

The van belongs to a company called Mas Que Ocio (MQOcio) which transports people between businesses, bars, restaurants, cafeterias, gyms and many more, which are signed up to their service. The innovative service is based round an app which is used to call a mini-bus to take clients to their destination.

But instead of welcoming the innovative spirit of the business people some taxi drivers have decided the company will take trade away for them.

Diego Gonzalez, director of MQOcio said: “The taxi drivers consider us to be unfair competition and are taking justice into their own hands by threatening us with death, insulting us, painting and burning the vehicles which they consider to be competition – all without anything anyone can do to avoid it.

“We think that we have the right to work freely given that this is a legal company with all its workers correctly contracted and all the taxes paid.”

Gonzalez has given police license numbers of four taxis which were seen constantly driving around the area where the van was in the days running up to it being burnt.

The business will now have to lay off four people for an unspecified amount of time, until the van can be repaired.

Marbella council is asking for both sides to remain calm until the question the matter can be resolved.

Editor’s note: The five young people who have set up this firm have spotted a gap in the market and used entrepreneurial spirit to develop a good idea into a business.

They should be rewarded and officially recognised for giving customers a useful service which is in the public interest. They deserve to have help to develop their business and be protected from persecution.

Let us hope the public authorities do their duty and help protect MQOcio from vested interests.

USERS of MQOcio simply pay an annual subscription of €120 to give them access to the shuttle services. Using an app downloaded to their smartphones they can call a driver to pick them up and take them to any of the subscribing businesses, then back home again.

With an ever growing list of restaurants, bars and other businesses signing up there is a wide selection to choose from, meaning it takes all the hassle out of travelling into Marbella. There are no parking problems and it saves on petrol and parking fees.

Businesses benefit by attracting new clients, and even their staff can take advantage of the system for the equivalent price of 33 cents a day – a big saving on parking and petrol.