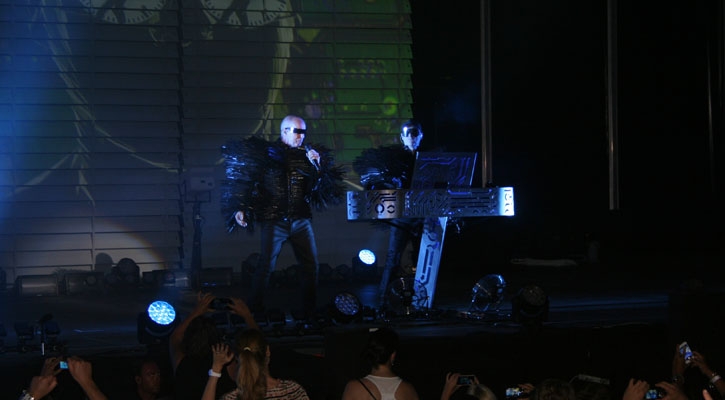 Last night’s Starlite concert in Marbella stood up to the rest and dare I say it, may have been even better than those that have gone before. The Pet Shop Boys are still going strong and have been since 1981… 33 years!! That must put them in the music history books alongside other greats such as Duran Duran and Madonna! Marbella news will be buzzing with excitement!

They opened the night with an amazing rendition of One More Chance, which had the crowd on their feet immediately! Their set included tracks from their latest album Electric which includes original songs plus a cover of the Bruce Springsteen classic The Last to Die. This electro-pop duo manages to stay right up to date with current music despite being in ‘the biz’ for more than three decades. As well as fabulous tracks from their new album, they also played some of the best Pet Shop Boys classics songs such as West End Girls, Go West, It’s a Sin, Always on my Mind and Being Boring.  The atmosphere was electric with the entire crowd singing along to these timeless tunes.

The quirky costumes and fantastic lighting, the trademark of the Pet Shop Boys, was as spectacular as ever but was no comparison to the music which was the real star of the night. The Costa del Sol news will be raving for weeks about this triumphant show. It is always difficult to tell how much of the Pet Shop Boys show is tongue-in-cheek, with their outrageous outfits and camp staging, but whether they are serious or silly, they are certainly original.

This clever, funny, unique, talented duo managed to take us back to the eighties and then right back to the present day again with their thoroughly entertaining extravaganza.

The UK band is made up of long-time friends Neil Tennant and Chris Lowe. They have produced 12 studio albums to date plus six compilation albums, two B-side albums, four remix albums, three soundtrack albums and two live albums. They have sold over 50 million records in their illustrious career, with 42 singles reaching the top 30… impressive hey?