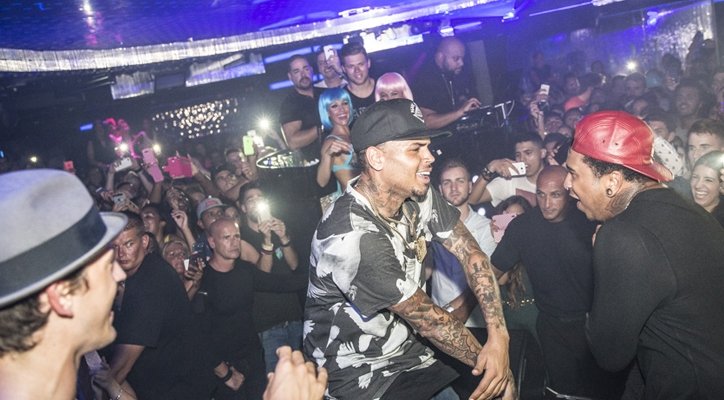 Chris Brown brought Puerto Banus superclub Aqwa Mist to a standstill in the early hours of Monday morning. Playing to a packed venue of fans, Chris Brown’s surprise appearance has skyrocketed the club’s reputation as the best dance venue in Southern Spain.

Brown, currently one of the world’s hottest and most-talked about R&B and hip-hop stars, flew in by private jet from St. Tropez at 2am. The star, whose turbulent personal life keeps hitting the headlines, with conjecture about his split last Friday from Karrueche Tran all over the press, tweeted to his 13.5 million followers on Twitter, “Team Breezy, I’m in Marbella Spain tonight!!!  I’ll be @Aqwa Mist! “

Arriving at Aqwa Mist with his entourage, the Award-winning American musician, whose recent track Loyal has just gone platinum, while the video has had 100 million views, roused the club’s party crowd with a unique, one-off performance in Spain this summer.

At 4.30am, the talented 25 year-old came on stage with three more rappers and performed some of his best tracks live to the thrilled public of dedicated Chris Brown fans – some of whom had travelled from as far away as China and the US. Beautiful People, Loyal, Forever and International Love were among the songs Brown sang live in Marbella.  The superstar rapper who has performed with the likes of Pitbull, Chipmunk, David Guetta and Justin Bieber kept the hits coming with Kiss Kiss, Turn Up The Music, Run It and Don’t Wake Me Up.

The star, whose recent tweets express regret for his mistakes, seems to be cleaning up his act. His tame rider at Aqwa Mist on Sunday night included a supply of energy drink PoweradeDirecto, his preferred drink, along with healthy platters of fresh fruit while the rest of his group drank Cristal, Platinum Patron, Hennessey and Stolichnaya. Straight after his performance Brown posed for a few photos with fans before jetting off in his private plane before dawn broke in Marbella.

Next up among the huge international acts coming to Aqwa Mist this summer – Rudimental DJ return to the club on 13th August after their sell-out concert last year, followed by the über-popular DJ Snake on 20th August.  For details and ticket sales go to